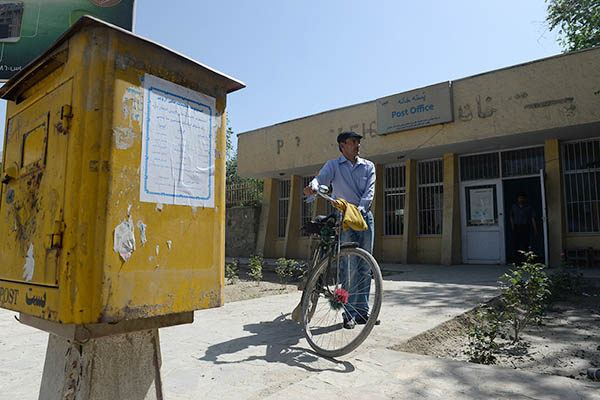 Until the Afghan communication ministry can set up a new address system, postal service workers use vague directions to complete their jobs.

In Kabul, many streets have no name and houses often have no number, meaning that postmen already braving the constant threat of suicide bombings must play detective to deliver mail.

Mohammad Rahim makes his rounds on the tattered, hilly streets of the Afghan capital riding an old bicycle. After 10 years on the job he is undaunted by even the most vague addresses on letters. “Here we have a letter for a man who lives near Dr. Hashmat’s house,” Rahim, 46, says. “I don’t know the address, so let’s see, how can we find the right place?”

His only clues are the addressee Mohammad Naeem, the doctor’s name and instructions on the back of the envelope saying “Kart-e-Sakhi hilltop, behind the agricultural ministry.” Wearing a black fur hat, blue jeans, and a violet T-shirt, he cuts a familiar figure and is often recognized by Kabul residents. He sets off from the neighborhood post office to start asking people for help.

“Brother, can you tell me—where is Dr. Hashmat’s house?” Rahim shouts at a shopkeeper. “Go up the hill, and turn right,” comes the reply, so Rahim sets off up the rocky road. Further on, another man tells him: “Turn right and it is the third house on the left.”

After waiting outside the gate, a woman in her 40s comes out: Mohammad Naeem’s wife, who takes the letter for her husband. “We have received letters from the U.S., Canada, Germany, and Pakistan, and the postman always brings them safely and on time,” she says.

Rahim delivers dozens of letters every day across west and southwest Kabul, a city reduced almost to ruins in the brutal 1992-96 civil war.

The Kabul population has boomed to five million as people have flooded in seeking employment and an escape from the fight against the Taliban, but much of the recent expansion is illegal, with many houses and shacks built on contested land or without planning permission.

But the days of confusion over addresses could soon be over, as last month the communications ministry signed an agreement with city authorities to create a comprehensive new address system. All streets and houses will be coded, numbered, and mapped in a two-year project that the government hopes to expand to other cities. The scheme—which will use global positioning system surveying—should help Rahim, and fellow postmen such as Khan Agha, 42, who works in a post office in the central Shar-e-Naw district.

For now Agha, who first started delivering mail 22 years ago, says the chaotic street mapping makes it “the most difficult job in the world.”

“We don’t care about traffic, summer or winter, smog or rain but there are many vague addresses, though a telephone number on the back of the envelope can help,” he says. “We ring them up and they say ‘I’m standing here’ so we go and hand over the letter. I do my best to treat people well. We see on television that postmen are admired in foreign societies, because we connect the sender and receiver.”

The job is even more challenging for Agha, who lost his right eye when he was serving as a soldier more than 20 years ago, another victim of the fighting that has battered Afghanistan for decades. “One day in the fighting, I was shot with a bullet in the back of my head and the bullet came out of my right eye socket.”

Admitting that the injury continues to trouble him, Agha scrabbles through a huge pile of mail on the post office floor, looking for what needed to be delivered to his area. “We are going to take a letter to a Mrs. Barbara in Sherpoor sent in from Germany,” he says. A common occurrence, the letter only has the district name—without any house or street number. After a search lasting nearly two hours and asking 12 different people, including the local baker, he finally finds the small lane where the intended recipient works in a health center.

Such hard work is not well rewarded in Afghanistan, which has 900 postmen nationwide with 100 in Kabul. Agha earns just 5,000 Afghanis ($90) a month. Barely enough, he says, to feed his family of eight.

But he is hopeful that soon most streets and houses in Kabul will have a proper name and number. “This is a good move by ministry to create a new postal system,” he says. “With the completion of this project, we could do our job more easily.”