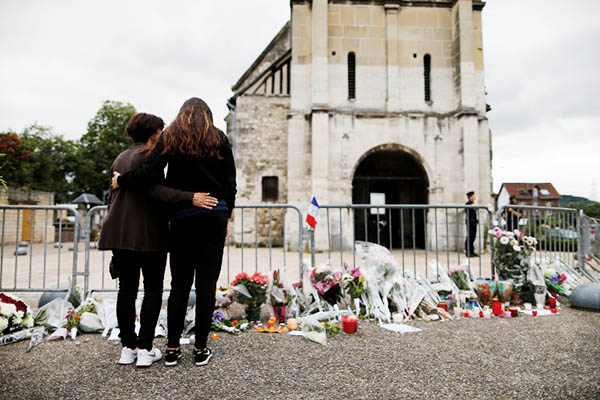 Teenaged assailant had repeatedly tried to flee to Syria before attacking a church in France and claiming allegiance to Islamic State.

One of the assailants who slit the throat of an elderly French priest had dreamed of going to Syria and threatened to attack churches—but seldom visited his local mosque, neighbors said.

Adel Kermiche, 19, had been known to the French authorities before Tuesday’s shock church attack in a Normandy town and was described by one acquaintance as a “time bomb.” Kermiche and another unidentified man stormed the centuries-old stone church in Saint-Etienne-du-Rouvray, taking priest Jacques Hamel hostage along with three nuns and two worshippers before slitting the elderly cleric’s throat.

He lived in his parents’ modest home—less than two kilometers from the church—where he spent much of the day under curfew, fitted with an electronic tag while awaiting trial for alleged links to terror. A family member had raised the alarm after Kermiche went missing destined for war-torn Syria in March 2015.

German authorities arrested him shortly afterwards as he attempted to transit the country using his brother’s identity. He was returned to France where he was detained on March 23 last year for “criminal association in connection with terrorism” and preparing a terrorist act. He was released on bail but banned from leaving the Seine-Maritime region of northern France. Six weeks later he fled the family home once again and was ultimately traced to Turkey where he was detained on May 13 last year.

He was arrested on his return to France and remanded in custody before being released on bail subject to a curfew as he awaited trial for links to terrorism. “We knew he wanted to go to Syria,” said a 60-year-old neighbor of the assailant’s family, who added that he “never saw him go to the mosque” that the family attended. “He never spoke to us,” said the neighbor. “The last time I saw him was on Friday. He was playing football in his garden.”

Sister Danielle, a nun who managed to escape the hostage situation and alert police, described how the attackers made Hamel kneel at the altar in his white vestments. “In the church everyone was shouting ‘stop, you don’t know what you’re doing.’ But they didn’t stop. They forced him [Hamel] to get down on his knees. He tried to struggle, he tried,” she told RMC radio. “They recorded it. They did something like a sermon around the altar in Arabic,” she added.

Danielle then fled the church in a daring escape after which she was able to call police. Three other hostages escaped unharmed while one worshipper had severe knife injuries to his throat.

One of Kermiche’s acquaintances, a youngster from the area of Saint-Etienne-du-Rouvray, told Le Parisien newspaper that he was a “hyperactive child” who was excluded from school at the age of 12 due to “behavior issues”—adding that he was a “time bomb.”

“He only spoke about Syria, and his dream of killing Bashar [al-Assad’s] soldiers,” they said.

French daily Le Monde reported that Kermiche had struggled with psychological issues for much of his life, having been monitored from the age of six and hospitalized on several occasions in his teenage years, including 15 days in a specialist psychiatric unit. Another of the town’s residents, a teenager who said he knew the attacker, told RTL radio he was not surprised by what happened Tuesday.

“He talked about it all the time… He spoke about Islam, that he was going to do stuff like that. He told me two months ago, ‘I’m going to do a church.’ I didn’t believe him. He said a lot of things,” said the teenager. Another resident who said he also knew the attacker told RTL: “He was a young guy like us. I don’t understand how he changed like that. What he did has nothing to do with Muslims, he did that of his own accord.”

Police shot dead both attackers outside the church after negotiations failed and they ran toward them shouting “Allahu Akbar,” with one of them carrying a handgun.