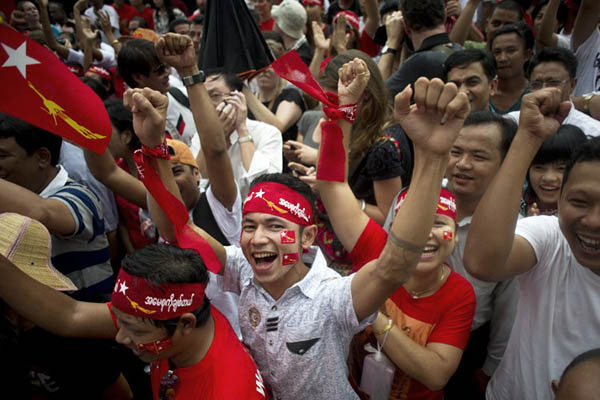 The National League for Democracy has won 15 of 16 seats counted in Yangon on Monday.

Aung San Suu Kyi’s pro-democracy party snapped up nearly all the first batch of seats to be declared from Myanmar’s election, as the opposition eyed massive gains to carry it to power after decades of military dominance.

The National League for Democracy’s hopes of a decisive victory surged on Monday afternoon after poll authorities handed it 15 of the first 16 seats to be counted in Yangon. Earlier party spokesman Win Htein told AFP that unofficial tallies showed the opposition was “on track to win more than 70 percent of seats around the country.” He did not specify if the percentage would translate into power under Myanmar’s complex political system.

The NLD needs 67 percent of available parliamentary seats to enjoy a majority. That would be enough to overwhelm the USDP and their military allies—who are gifted 25 percent of seats by a constitution scripted to ensure they still have a major stake in the future.

The army-backed USDP, or Union Solidarity and Development Party, said it was ready for a wipeout in the commercial capital Yangon, while several of its heavyweights, including its chairman, lost their seats. But the NLD shied away from an outright declaration of victory, with election authorities expected to release results in several waves deep into Monday night.

Suu Kyi, who is still barred from the presidency under the army-drafted constitution, remained cautious, but hinted at victory. “It is not the time to congratulate our candidates who we think have won the election,” she told supporters and journalists from the balcony of her party’s Yangon headquarters. But “people have an idea of the result even if I don’t say it,” she added.

Election authorities have said that preliminary figures would be released within 48 hours of Sunday’s vote, and a full nationwide count in 10 days or so.

In its Yangon stronghold, the NLD took 12 lower-house seats and three more for the regional parliament. A fourth went to the USDP, which appeared increasingly beleaguered.

On the city’s streets, NLD supporters were buoyant. “I have no doubt about the results. I think everything is going to change,” said Yee Yee, 30, a market spice seller.

Supporters began to gather at the party’s downtown headquarters to watch the results on a big screen. “We have been waiting for these results for years,” explained Thuzar, phone shop owner, 42, buying a red t-shirt in the party colors.

Even the state-backed Global New Light of Myanmar declared the “dawn of a new era,” while USDP heavyweight Shwe Mann conceded on his Facebook page that he had lost his seat to his NLD challenger.

Sunday’s vote was laden with emotion for a nation that labored under five decades of often brutal military rule which enriched the generals as it condemned millions to poverty. The junta nominally gave up power in 2011, and the country has since spun through rapid change, with the quasi-civilian USDP government launching reforms that brought the end of most international sanctions. But the USDP was braced for major losses and some local media called on President Thein Sein to concede without delay.

A senior USDP member in Yangon, Tin Hlaing, said the party was facing a drubbing in the city, where more than 40 seats are up for grabs. “The NLD is winning the majority,” he told AFP. Party chairman Htay Oo told local media that he had lost his seat in Hinthada, a few hours from Yangon.

Sunday’s vote saw enthusiasm for democracy soaring among the 30 million registered voters, many of whom began queuing before dawn to cast their ballot.

Among them were many first-time voters, while others had last voted a quarter of a century ago only to see their hopes crushed by the military when it ignored the results, an outcome they fervently hope will not be repeated this time around.

Election officials estimated an 80 percent turnout, a figure observers say will aid the NLD’s quest for a majority.

President Thein Sein and the still-powerful army chief have both vowed to respect the outcome of the election—even if the USDP loses its chokehold on power.