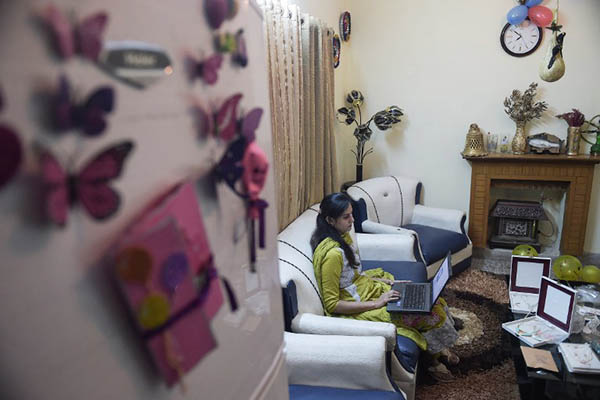 In the Hindu Kush mountains craftswomen painstakingly stitch flowing scarves, skilled artisans who were unable to sell their products beyond the remote region until mobile Internet came to Pakistan and dropped the market into the palms of millions of previously marginalized people.

The women of northern Chitral are among the unlikely profiteers of an e-commerce boom since 3G and 4G Internet arrived in Pakistan in 2014, suddenly able to market and sell traditional products without leaving their villages or in some cases even their homes. “The online platform eliminates the middleman,” says Nasrin Samad, the entrepreneur behind the artisan brand Kai, which works with women across the region. Now, Chitrali women “have access to a global audience,” she says.

Kai products are sold on polly & other stories (pollyandotherstories.com), which launched late in 2015 to connect traditional artisans like those in Chitral with consumers hungry for “authentic” products. “Years of working with local community and craft groups had shown us how difficult it was for local small businesses, even the most talented, to access mainstream markets or connect with buyers, both within Pakistan and abroad,” said founder Amneh Shaikh-Farooqui. To bridge the gap, says co-founder Ange Braid, the pair built a website to give “small, creative businesses, many of them led by women or young students, the chance to market and sell.”

Opportunities like this in a country like Pakistan are “huge,” says Adam Dawood, head of online marketplace Kaymu.pk. In the first quarter of 2015 smartphone shipments to the country soared by 123 percent, according to the Pakistan Telecommunication Authority’s annual report, one of the fastest growth rates in the developing world.

Broadband subscribers have topped 26 million people, the Ministry for Information Technology said in February, with broadband penetration going from three percent to more than 15 percent.

The ministry cited World Bank studies showing that a 10 percent increase in high-speed Internet connections can boost Gross Domestic Product (GDP) by 1.38 percent, adding the arrival of broadband in Pakistan is set to have a “very positive impact on economic growth.”

Dawood echoed the report’s optimism. “There are tremendous opportunities for everyone to start selling and buying instantly and earn money,” he said.

Women are seeing the benefits, but e-commerce presents potentially an even greater opportunity for young people in a country where roughly two thirds of the population—of around 200 million—are estimated to be under the age of 30.

A recent economic survey by the finance ministry singled out the challenges facing youth in Pakistan, including “limited job search expertise, a mismatch between education, aspirations and employers’ requirements and a lack of mobility, among other factors.”

Seventeen-year-old Daniyal Admaney says he was able to defy skepticism over his youth to launch his T-shirt design business on Kaymu. “I… thought that I should do something productive during summer vacations when I have nothing to do except getting bored and sleeping,” he says.

The online marketplace launched in the country about three years ago and now boasts 3,000 transactions every day, with around 11 million unique visitors in 2015, Dawood told AFP.

Kaymu now employs some 150 people in Lahore and Karachi working with 15,000 vendors like Admaney, and has a customer base of more than 300,000 people from around the country. It has also helped bring some international e-commerce sites to Pakistan, such as carpooling site Tripda and restaurant delivery site foodpanda.

But global giants of e-commerce such as Amazon still do not have an established presence in Pakistan, hampered by a lack of regulations and infrastructure such as a payments system, says I.T. expert Shahzad Ahmad. Unrest in the militancy-plagued country is also a factor, he says.

The promise of Pakistan remains enormous, he says, adding that the country’s central bank “should undertake a study on the potential of online business and also come up with clear regulatory framework so that foreign giants are attracted to tap into Pakistani e-commerce market.”

Some hurdles are in the process of being removed already. Last year the global Financial Action Task Force removed Pakistan from its list of high-risk and non-cooperative jurisdictions linked to money laundering. Following the decision, the I.T. ministry announced in November it will ease e-commerce regulations and invite online payment giants PayPal and Alibaba to the country, where cash on delivery remains prevalent but use of debit and credit cards is growing.

In the meantime, ambitious Pakistanis are crowding the booming market with their own, localized, and in many cases successful products.

Launching an online business allows Nosheen Kashif, a former banker who quit her job to raise her family, to remain a housewife even as she launches an online jewelry selling business. “The scope of selling online is nationwide,” she says.