Protests in Bangladesh Over Court Review of State Religion 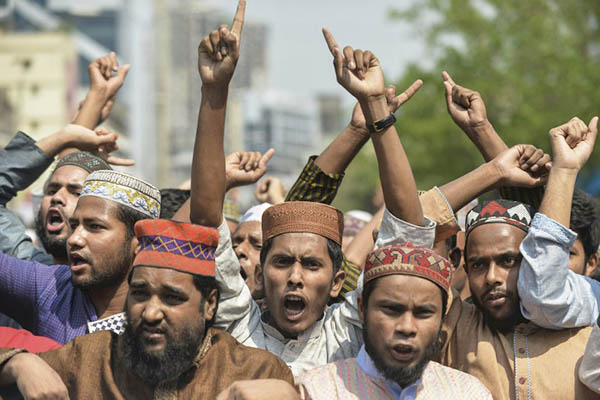 Thousands of hardline Islamists on Friday staged protests across Bangladesh against an imminent court hearing on scrapping the state religion of the Muslim-majority nation.

Constitutional changes dating back over three decades have put Bangladesh in the unusual position of being officially secular while still having Islam as a state religion. More than 90 percent of the population is Muslim, with Hindus and Buddhists the main minorities.

Some 7,000 activists took to the streets of capital Dhaka after Friday prayers, chanting anti-government slogans and holding banners against the controversial High Court hearing scheduled for March 27. Earlier this month, the High Court agreed to hear a petition by secularists who have argued for decades that Islam’s status as the state religion conflicts with Bangladesh’s secular charter and discriminates against non-Muslims.

“We will save our religion even at the price of our blood,” chanted activists of hardline group Hefazat-e-Islam.

Demonstrations were carried out in nearly all the major cities of the country including Sylhet and Barisal, with several top leaders of Hefazat threatening violence if the court moves to drop Islam as the official state religion. “If Islam gets scrapped as our official religion, we will unleash an all-out movement even if blood is needed to be shed,” said Noor Hossain Quashemi, one of the group’s leaders. “Sixty countries in the world have state religions—why is there a problem for us to have one?” he said as he addressed thousands at the Baitul Mukarram national mosque.

The court’s move threatens to exacerbate tensions between secularists and hardliners in the conservative nation, which has recently seen a spate of killings of atheist bloggers, religious minorities and foreigners.

Bangladesh was declared officially secular after a deadly liberation struggle against Pakistan in 1971. But in 1988 the then-military ruler elevated Islam to the state religion of the South Asian country in an effort to consolidate power.

The government of Prime Minister Sheikh Hasina brought back secularism as a pillar of the constitution, but promised it would not ratify any laws that go against the central tenets of the religion.