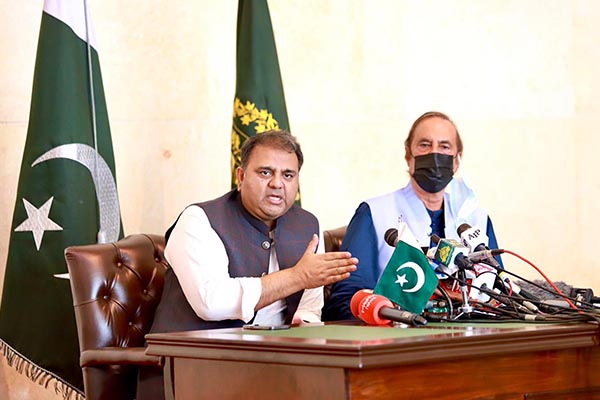 Two members of the federal cabinet on Monday announced that the Pakistan Tehreek-e-Insaf-led government planned to legislate electoral reforms that would ensure transparency and end the practice of losing parties accusing the winner of rigging.

Addressing a press conference in Islamabad, federal Information Minister Fawad Chaudhry and Adviser to the P.M. on Parliamentary Affairs Babar Awan said that the government’s proposed reforms included changes to 49 sections of the Elections Act, 2017, including deletions and amendments. Among these, said Awan, was Section 103, which would be amended to allow the use of electronic voting machines in a bid to resolve accusations of rigging. “This will be the first big reform in Pakistan’s history,” he claimed.

In addition, he said, Section 94 would be amended to extend the right of vote to overseas Pakistanis in line with their demands as major contributors to the country’s economy through remittances. “Democracy should be seen in political parties,” he said, referring to the third aspect that was being changed. As part of this goal, said Awan, Section 202 would ensure that political parties had at least 10,000 members before they could get registered. Section 213(A), meanwhile, would be added to require political parties to hold annual conventions.

The adviser to the P.M. said the legislation also aimed to resolve complaints related to the functioning of polling staff and presiding officers. He said that a provision was being introduced under Section 15, which would allow any party to contest the appointment of a polling agent or officer within 15 days.

Awan said the government also wanted to prepare electoral rolls on the basis of NADRA data, claiming this was the most troubling aspect for people who came to power through fake means. He said this would be achieved by scrapping some provisions of the Elections Act, 2017, adding that NADRA lists of registered voters would be used to determine constituencies.

“We are also bringing two constitutional amendments,” he said, explaining that the government wanted to introduce open balloting in Senate elections and allow overseas Pakistanis the right to contest elections.

Awan claimed that the government had to choose between allowing elections to continue as they had in the past—and risk repeated claims of rigging—or enact reforms that would resolve the most common concerns. “Prime Minister Imran Khan has adopted the second route; that we will do electoral reforms and move forward,” he said, adding that the government planned to place the proposed reforms before members of the civil society, press clubs, bar councils and associations and other stakeholders to help improve the parliamentary system.

“Our foundational point about democracy has been trust in elections and electoral results,” said the information minister, noting that both the PMLN and PPP had previously called for open balloting in the Senate polls. “If you aren’t ready for reforms, if we just have to cry after every election … then your political and democratic development will stop. You won’t be able to go ahead, that is why Imran Khan’s vision is that come, let’s do reforms together,” he said, as he urged the opposition to sit down with the government and legislate the required reforms.