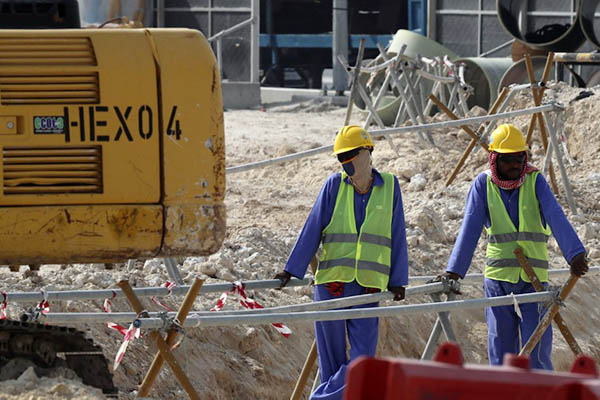 Qatar is set to abolish its controversial exit visa system for all foreign workers by the end of the year, the U.N.’s International Labor Organization said on Friday.

Qatar has introduced a series of labor reforms since its selection to host the 2022 World Cup, which set in motion a huge construction program employing foreign workers. “Last year, the exit visa was eliminated for the majority of workers,” ILO’s Houtan Homayounpour, head of the labor agency’s project office in Doha, told AFP. “This year, that will be extended to all remaining categories of workers.”

In September 2018, Qatar approved legislation to scrap the “kafala” or sponsorship system, which required foreign workers to obtain permission from their employers to leave the country. In October, it went into force for all but five percent of a company’s workforce—reportedly those in the most senior positions.

Homayounpour said “this year is a big year” for migrant workers and the exit visa system “will officially be eliminated” by the end of 2019.

Homayounpour spoke to AFP on the sidelines of a 5-kilometer fun run organized for migrant workers by the ILO, Qatar’s Ministry of Administrative Development, Labor and Social Affairs and the embassy of the Netherlands.

Speaking to AFP after completing the run, U.S. Charge d’Affairs William Grant voiced support for Qatar’s reforms. “The United States and the international community has noticed and we want to help Qatar keep making progress because it’s a constant effort,” he said.

In February, the gas-rich Gulf state said it was committed to labor reforms, following an Amnesty International report that the 2022 World Cup host was failing to stop widespread abuse of workers. Doha said it was on course to deliver “lasting” change after the human rights group said it was “running out of time” to implement the reforms before the World Cup.

Qatar has also introduced a monthly minimum wage of 750 riyals ($206) and agreed to work closely with the ILO, which now has an office in the capital.