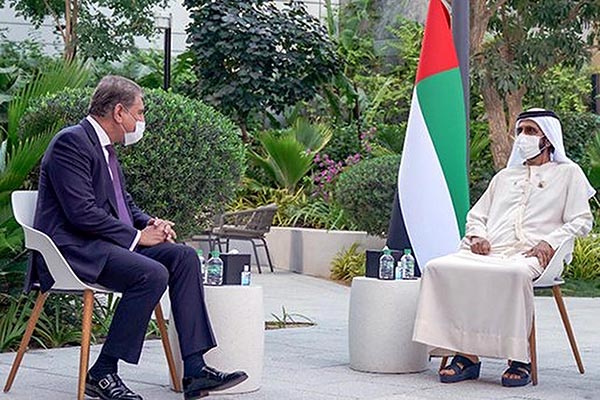 According to a statement issued by the Ministry of Foreign Affairs, the two ministers reviewed bilateral relations and exchanged views on regional and global issues. “Foreign Minister Qureshi elaborated the worsening situation in Indian Illegally Occupied Jammu and Kashmir and the precarious security situation in South Asia,” it said, adding that he also detailed Pakistan’s efforts to support peace and reconciliation in Afghanistan.

Both foreign ministers agreed to enhance bilateral ties between their two nations, in particular in the areas of economy, trade and investment. Qureshi assured his counterpart of active participation in Dubai Expo 2020, and appreciated the U.A.E.’s leadership for its consistent support of Pakistan, especially during the COVID-19 pandemic.

Praising the hard work and dedication of Pakistani professionals and workers in the U.A.E., the foreign minister acknowledged their positive contribution toward progress and development of Dubai as well as Pakistan. He also discussed matters pertaining to the Pakistani diaspora’s welfare, and stressed the need to further strengthen people-to-people linkages between the two countries.

Qureshi expressed his sincere appreciation for the warm welcome and hospitality extended to him and his delegation during the visit and cordially invited Al Nahyan to visit Pakistan on mutually convenient dates in near future.

The foreign minister also called on the ruler of Dubai, His Highness Sheikh Mohammed bin Rashid Al Maktoum and discussed issues pertaining to the welfare of Pakistani diaspora in the U.A.E. According to the Foreign Office, Qureshi urged the Dubai ruler to encourage his country’s business community to invest in Pakistan, and reaffirmed Islamabad’s commitment to strengthening and augmenting preexisting strong bilateral relations with the U.A.E.

Wishing Dubai Expo 2020 a resounding success, Qureshi expressed gratitude to the U.A.E. government in enabling Pakistan to participate in the event. “Pakistan and the U.A.E. have close and historic fraternal ties,” read the official statement.

Qureshi is currently on a two-day visit to the U.A.E. The visit is taking place weeks after the U.A.E. included Pakistan among 12 countries for whose nationals it had suspended visit visas. According to the Foreign Office, the foreign minister would also meet the Pakistani community and interact with international media during his visit.