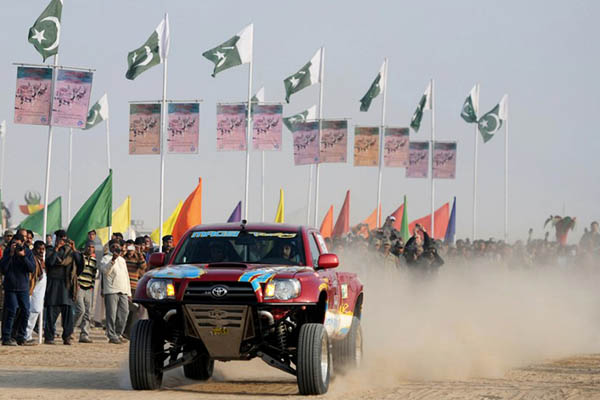 In a cloud of dust and diesel fumes, a souped-up 4×4 roars through the silence of Pakistan’s Cholistan desert, cheered on by tens of thousands of spectators.

Nearly 90 drivers were drawn to throw their vehicles around the dry, rocky 214-kilometer track in a desolate, scalding hot corner of Punjab province for this year’s Cholistan Jeep Rally. The event, which began in 2005, has grown in popularity despite the remote location, about 400 kilometers southwest of Lahore, with fans coming from across Pakistan to see the action.

Officials from the Tourism Development Corporation of Punjab (TDCP), which organizes the festival, say that the rally, which took place last month, is becoming more popular every year. “We estimate a total of 200,000 people from local villages and the major cities turned up,” a dust-covered Habib-ur-Rehman Gilani, the TDCP managing director, said on the finish line. “It helps locals to improve their living. They rent out their houses and install food stalls to earn money from the visitors.”

Life for those who dwell in the desert is hard, with limited economic opportunities and regular water shortages hitting livestock—the main source of income for many people. This year, a festival of music, dance, wrestling and camping events was held alongside the rally to entertain visitors—and bring work to local people.

Drummer Ghulam Nabi, who lives in Liaquatpur, around 60 kilometers away, earned Rs. 6,000 in three days—twice as much as he would normally make in a month. “There are not enough parties and weddings in my town which could help me to earn a living through drumming, so this was a very good event to earn a few extra thousand rupees,” said the mustachioed Nabi after whipping up the crowd with his drum.

The old princely state of Bahawalpur, of which Cholistan was part, was ruled for centuries by the Abbasi dynasty and was only fully merged into Pakistan in the 1950s, several years after independence from Britain. The elegant white marble tombs of long-dead Abbasi “nawabs” and their queens provide an elegant backdrop to the rally. Their crumbling Drawar fort was host to a fireworks display before the race—a huge boost to business for Fiaz Ahmed Shirazi, who runs a fireworks business in the area.

“I earned Rs. 300,000 from the fireworks at this event,” he said. “There are other vendors who set up food stalls during the rally and earn thousands of rupees in a short period.”

Back on the starting line, thousands of locals and tourists from Karachi, Lahore and Islamabad cheer the drivers, whipped up by musicians in colorful traditional costumes. “It’s awesome,” said Ameera Rao, 26, an event manager, who traveled from Lahore with friends for the rally. “The experience is very thrilling,” she added.

Foreign tourism in Pakistan has ebbed, badly hit by the country’s fearsome reputation for extremist violence. After seven years of a homegrown Taliban insurgency, tourism officials are desperate to improve the country’s image to attract more overseas visitors. “We have planned to take it to other countries through our embassies and 4X4 clubs in different countries,” Gilani said. “We are trying to bring international drivers in the rally. It will boost this sport and tourism in our country.”

The event has a following among foreigners living in Pakistan. Axel Wech, the Austrian ambassador, made the trip with his 72-year-old mother. “This event is something positive in a country which is always known for negatives,” said Wech. “People are very friendly here. More international promotion of this rally can bring international tourists over here.”