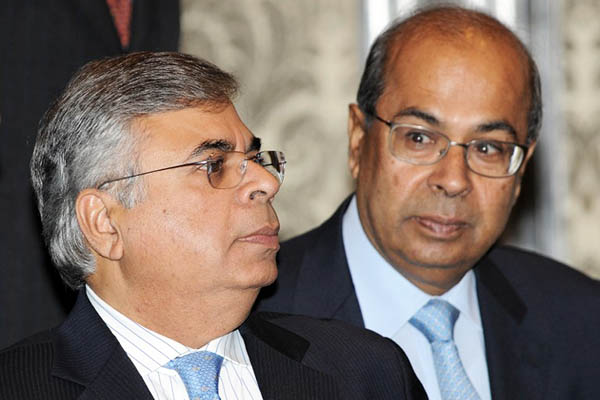 Indian-origin Hinduja brothers lead the pack with a net worth of £13.5bn.

Britain’s South Asian communities celebrated their contribution to the British economy on Friday, highlighting the industrialist Hinduja brothers as among the wealthiest tycoons in the country.

“The event is a celebration of Asian business excellence, acumen and achievement, with Asian business leaders mixing with powerful policymakers, business trendsetters and celebrities,” organizers said. “Asians have come a long way from the stereotypical corner-shop owners.”

Sponsors Asian Media and Marketing Group (AMG) published an Asian Rich List showing the combined overall net worth of the 101 wealthiest had reached £51.5 billion—an increase of £6.5 billion on last year. The London-based Hindujas, entrepreneurs who co-chair the multinational Hinduja Group conglomerate, were ranked as Britain’s richest South Asians with a total worth of £13.5 billion.

“The lesson one can learn was from what my father used to say—never put all your fruits in one basket,” said Gopichand Hinduja. “This has always been rewarding for the group because suddenly if you have an economic crisis in one country there is somewhere else where things are progressing.”

The Hindujas edged out Indian-born Lakshmi Mittal, chairman and chief executive of steelmaker ArcelorMittal, who is worth £12 billion according to the list. AMG executive editor Shailesh Solanki said the list “shows the remarkable strength and diversity of Asian businesses in the U.K.”

“Despite the challenges of the general economy many business leaders in the community have seen opportunity and potential and moved quickly to capitalize. It is an inspiring picture and one that should energize entrepreneurs everywhere,” he said.

Almost everyone are of Indian origin. The topic should’ve been ‘UK’s richest Indians’.