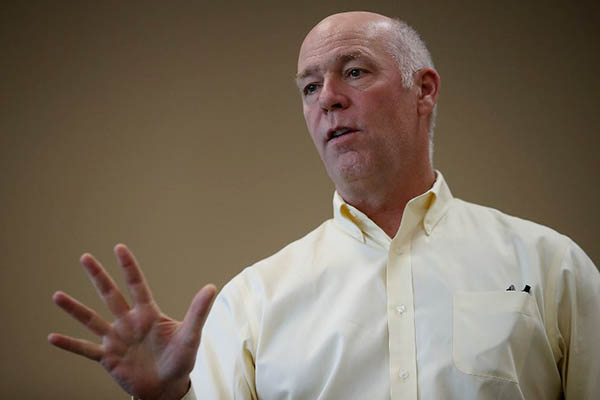 Altercation took place after journalist asked a question about healthcare

A Republican running for Congress in Montana was cited for misdemeanor assault after he allegedly “bodyslammed” a reporter for The Guardian newspaper on Wednesday on the eve of the state’s hotly contested vote.

The altercation between Greg Gianforte—who is running for the state’s only congressional seat in Thursday’s special election—and journalist Ben Jacobs took place at a campaign event at Gianforte’s headquarters in the city of Bozeman, Montana, The Guardian said.

“Following multiple interviews and an investigation by the Gallatin County Sheriff’s Office it was determined there was probable cause to issue a citation to Greg Gianforte for misdemeanor assault,” said a statement from Sheriff Brian Gootkin released late Wednesday night. The Republican is now slated to appear in county court prior to June 7, the statement said, with a possible penalty of up to six months in county jail and a $500 fine.

Gootkin also disclosed that he had in March donated $250 to Gianforte’s campaign.

The development heightened the drama of an already highly scrutinized special election in the traditional Republican stronghold of Montana, which has proved to be a far closer race than expected. It is seen as a key test of whether rural voters who helped send Donald Trump to the White House in November are sticking with him.

The altercation took place after Jacobs asked a question about health care. “Greg Gianforte just body slammed me and broke my glasses,” Jacobs tweeted before news of the alleged attack quickly spread on social media.

The reporter posted audio of the incident in which Gianforte appears to say: “The last time you came in here you did the same thing. Get the hell out of here!”

Police had said they questioned four witnesses to the incident. Others at the event corroborated the version of events—including a crew from Fox News, the most viewed U.S. cable news channel and a favorite of conservatives.

In a firsthand account published on the network’s website a Fox reporter said that at one point “Gianforte grabbed Jacobs by the neck with both hands and slammed him onto the ground behind him.”

Gianforte’s campaign issued a statement offering a starkly contrasting account, saying the incident took place when the candidate was giving a separate interview in a private office. “The Guardian’s Ben Jacobs entered the office without permission, aggressively shoved a recorder in Greg’s face, and began asking badgering questions,” the statement said. “Jacobs was asked to leave. After asking Jacobs to lower the recorder, Jacobs declined. Greg then attempted to grab the phone that was pushed in his face. Jacobs grabbed Greg’s wrist, and spun away from Greg, pushing them both to the ground,” it added. “It’s unfortunate that this aggressive behavior from a liberal journalist created this scene at our campaign volunteer BBQ.”

On Jacobs’s audio, businessman Gianforte is not heard asking him to lower his microphone. When Jacobs asks for the names of those present, saying he would go to the police, he is told, “you gotta leave.”

Following the incident two of the state’s major newspapers swiftly pulled their endorsements for Gianforte. The effect of the altercation on the race remained unclear, however, as many in the state have cast early ballots.

Jeremy Johnson, an associate professor of political science at Carroll College in the state capital Helena, earlier told AFP that the lead once enjoyed by Gianforte, who is running against Democrat Rob Quist, “has diminished in polling so much that it’s miniscule.”

The platform of Quist, a local folk singer and political newbie, has garnered support from left-wing activists as well as backing from one-time presidential contender Bernie Sanders.

The Democratic Congressional Campaign Committee called on Gianforte to resign late on Wednesday, saying he is “unhinged.”

“Greg Gianforte must immediately withdraw his candidacy after his alleged violent assault of an innocent journalist,” spokesman Tyler Law said in a statement. “Further, [House Speaker Paul] Ryan and the National Republican Campaign Committee should not waste another minute before publicly denouncing their candidate and apologizing for the millions of dollars they spent on his behalf.”

The Guardian’s U.S. editor Lee Glendinning said the newspaper was “deeply appalled by how our reporter, Ben Jacobs, was treated in the course of doing his job as a journalist while reporting on the Montana special election. We are committed to holding power to account and we stand by Ben and our team of reporters for the questions they ask and the reporting that is produced.”