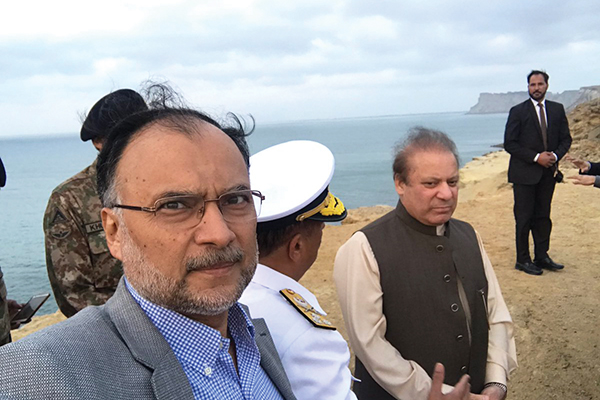 In conversation with Ahsan Iqbal

Ahsan Iqbal is deputy chairman of the Planning Commission and federal minister for Planning, Development and Reform, which is shepherding the China-Pakistan Economic Corridor projects. We spoke with the longtime politician and Wharton graduate about CPEC, institutional reforms, planning for the long haul, and more. Excerpts:

CPEC focuses largely on energy and communications infrastructure. How important is the development of the social sector?

The 18th Amendment to the Constitution devolved power to the provinces and makes the role of the federal government as a copartner and an equalizer complicated. While we are not responsible for any social sector functions directly, it is our responsibility to ensure that national standards, goals, and targets are met. Here’s the key challenge: Pakistan has a fractured and dysfunctional socioeconomic platform. We are addressing this through our “Pakistan 2025: One Nation, One Vision” policy roadmap, which identifies seven areas as our Sustainable Development Goals: social and human capital development; sustained, indigenous, and inclusive growth; institutional reform and modernization of the public sector; energy, water and food security; private sector and entrepreneurship-led growth; development of a knowledge economy; and modernization of transport infrastructure and regional connectivity. Economic growth and social sector development go hand in hand. We are a lower-middle-income ranking country by economic indicators, but among the least developed countries by our social indicators. So the SDGs are vital. We need to put people first, focus on human resources and the social sector, as the first pillar of our growth strategy. Our goal is inclusive development. We have increased funding for higher education to Rs. 215 billion over the last three years. Prior to 2013, the figure was Rs. 15 billion. Pakistan is the first country to adopt SDGs as national development goals through Parliament. We have set up an SDG unit in our ministry that is working closely with its provincial counterparts to oversee implementation.

We’ve witnessed depleting global interest in the region and a determined U.S. inwardness under President Trump. What are some of the factors pushing Pakistan toward China as a reliable economic partner?

In 2013, the U.S. and EU accounted for the highest investments in Pakistan. China was at No. 16. In the past we failed to translate political relationships into economic ones. With China, we saw the potential to turn our geopolitical partnership into a geo-economic one. China is now our No. 1 source of FDI—after it, our major investment partners continue to be the U.S. and the EU, especially in the energy and telecom sectors. CPEC’s $46-billion investment plan has changed Pakistan’s trajectory. Almost 75 percent of these investments are aimed at fixing our energy crisis and mix. In the last 20-odd years, we have moved from reliance on hydroelectricity to overreliance on oil-based power generation. In order to correct this, we will mine our huge coal reserves in Thar and set up a number of hydroelectricity projects also. Clean energy—wind and solar—is also on the cards. We will add 10,000 megawatts by 2018, compared to 16,000 megawatts added in 66 years. We want to put economics at the center of diplomacy. We are pursuing the U.S.-Pakistan Knowledge Corridor to train 10,000 Ph.D.s at top U.S. universities in the next 10 years which will provide Pakistan with strategic human capital.

CPEC has a completion horizon of up to 2030. Would post-election transfers of power affect the initiative?

The advantage of doing business with China is that everyone believes in Pakistan’s relationship with China. No single institution, party or leader is in a position to take Pakistan out of our mess singlehandedly. We have taken all parties into confidence on issues of long-term significance, whether it’s the Karachi operation or the National Action Plan or CPEC, for which everyone is onboard. We must learn from China, its stability and social solidarity. The CPEC tide, taken at the flood, will lead to fortune.

But some opposition parties have expressed reservations about CPEC.

I hope our political parties understand that this isn’t an ordinary project, it’s transformational. Instead of spitting venom in public spaces and social media, creating confusion in people’s minds, grievances should be aired through the parliamentary committee process. If we keep making irresponsible public statements, CPEC’s enemies will exploit this, show the country as divided over our deepening ties with China. We need to maintain our unity publicly. In the last Joint Coordination Committee meeting in Beijing, all four of our chief ministers participated and expressed full support for CPEC.

Have you been able to stem the government’s business-as-usual approach?

The Planning Commission used to be a post office. Now, we have a strong analytical structure in place for the appraisal of projects. As a result, we’ve saved over Rs. 500 billion through effective evaluation and monitoring. To be honest, a lot of ministries hadn’t done their homework and didn’t have correct estimates. We are also discouraging half-baked, half-cooked projects. The Neelam-Jhelum project is one example. It was approved at a cost of Rs. 84 billion. Its current estimate is Rs. 400 billion. We also have a huge youth bulge and to reap dividends from our demography, we must create 1.5 million jobs a year and grow the economy at 7 to 8 percent annually for that. We’ve been stuck in the 2 to 4 percent trap because of our business-as-usual approach, which is a path of destruction.

You’ve had fellow cabinet members criticize your Planning Commission as operating against the ‘national interest.’ How do you handle such friendly fire?

There’s a capacity problem with most of our civilian institutions; martial laws have sapped and marginalized them. When I returned to the office I left on Oct. 12, 1999, I found the efficiency level to have gone from around 45 percent then to 12 to 13 percent in 2013. People had lost morale, they had lost capacity. We are in a vehicle that has a maximum speed of 20 miles per hour, and the public wants you to go at 200 miles. You run it too fast and it breaks down. The controversy you mention comes with the changes we’ve made at the Planning Commission. We have tried to induct professionals, ask questions, and rationalize costs. Well, that disturbs ministries that were used to a docile Planning Commission and haven’t done their homework. They blame us and say we’re sitting on their projects. Take the Jamshoro power project. We were able to save Rs. 60 billion by rationalization. The Planning Commission just wants to do its job: to ensure value for taxpayers’ money. If you’ve made everyone happy, you’re failing.

Is your government’s speed keeping up with public expectations?

If your economy is strong, you are strong. If not, you have neither respect nor sovereignty. We’ve had too much of a ping pong between martial law and democracy; and during democratic rule, too much undermining of one another. Policies are seeds that take time to bear fruit. In 2007, Newsweek’s cover featured Pakistan as the most dangerous country in the world. Today, things are returning to normal—and I’m not just speaking of the economy. We have crossed 5 percent GDP growth after a decade, and our reserves have more than doubled. The security situation is normal and the energy crisis is coming under control. For the first time, we’re producing films and returning to culture, to art and literary festivals, and we must give momentum to this. Reform does not happen mechanically, it has to be continuous and organic.

Maryam Nawaz Sharif is widely seen as the heir apparent to her prime minister father. Does this square with the government’s claims of merit-based decision making?

Political leadership emerges through public approval. It’s not like other jobs. In Asian societies, family influence does play a major role. In Japan, I was surprised to hear that more than 60 percent of their Parliament hails from the same families. In Asia, children look up to their parents as role models. I was an engineer’s son so I opted for engineering—although I believe I could have made a top lawyer. Those trends are however changing, but it’s a continuing factor. We see it in the Philippines, South Korea, Bangladesh, Sri Lanka, and India, obviously. Truthfully, it’s all about serving people and earning their seal of approval.