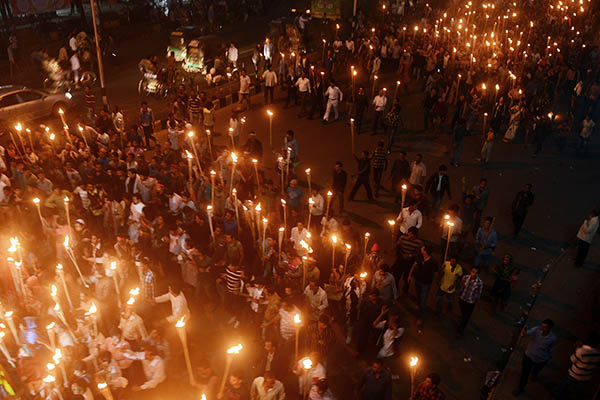 Two people killed in violence resulting from Jamaat-e-Islami leader’s hanging over his role in the 1971 war.

Bangladesh was rocked by a new wave of deadly violence on Friday as Islamist supporters went on the rampage to vent their fury at the execution of one of their leaders.

Abdul Quader Molla became the first person to be hanged for his role in the country’s bloody 1971 war of independence when he was sent to the gallows at a prison in Dhaka late Thursday.

The hanging took place at 10:01 p.m., after the Supreme Court had earlier dismissed an appeal for a final review of the death sentence handed down to Molla, who was a senior figure in the Jamaat-e-Islami party.

Fears that the execution could spark further unrest in a country that has been plagued by political violence for much of the year were soon realized as reports emerged of street battles in towns and cities.

Two activists from the ruling Awami League were hacked to death in the southern town of Kalaroa early Friday while Jamaat activists also firebombed train stations, set fire to pro-government businesses and blockaded roads, according to police and other officials.

While there were no immediate reports of violence in Dhaka, large numbers of police could be seen on the streets in anticipation of unrest—particularly after Friday prayers on the Muslim day of rest.

In Washington, a State Department representative said Bangladesh was passing through a “very sensitive moment,” urging all parties to resolve their differences peacefully. “We’ve long urged the authorities to assure that trials are free, transparent and in accord with international standards, but we’ve also urged all parties and their supporters to express their views peacefully and again, to refrain from violence,” said deputy spokeswoman Marie Harf.

Authorities went ahead with the execution despite widespread international appeals against the move, including from the United Nations’ Secretary General Ban Ki-moon.

The government, which has also rebuffed international pressure to delay elections scheduled for next month, was unrepentant about the decision to carry out the execution of 65-year-old Molla. “It’s an historic moment. Finally after four decades, the victims of the genocides of 1971 liberation war have got some justice,” said deputy law minister Quamrul Islam. “It’s the best gift for (the) nation as we celebrate Victory Day on Dec. 16,” he said, referring to the national day that marked Bangladesh’s independence from Pakistan.

Molla’s wife and children were allowed a final meeting with him at the prison hours before the execution, and found him to be “calm.”

“He told us that he is proud to be a martyr for the cause of the Islamic movement in the country,” said Molla’s son Hasan Jamil.

Shortly after the execution, Molla’s body was driven by police escort to his home village in Faridpur district, where he was buried beside his parents’ graves in a pre-dawn service attended by around 300 people, said local police Mohammad Ali.

The Jamaat has called the execution a “political murder” and warned of exacting revenge for “every drop” of Molla’s blood. But in a sign of the sharp divide in Bangladesh, thousands of secular protesters erupted in celebration as news of the execution came.

They had been camping at Shahbagh square in Dhaka since Tuesday night, shouting slogans including: “Hang Quader Molla, hang war criminals.”

After a trial by a much-criticized domestic tribunal, Molla was found guilty in February of having been a leader of a pro-Pakistan militia, which fought against the country’s independence and killed some of Bangladesh’s top professors, doctors, writers and journalists. A key opposition official, he was convicted of rape, murder and mass murder, including the killing of more than 350 unarmed civilians. Prosecutors described him as the “Butcher of Mirpur,” a Dhaka suburb where he committed most of the atrocities.

Molla was one of five Islamists and other politicians sentenced to death by a domestic court known as the International Crimes Tribunal, which the opposition says is aimed at eradicating its leaders. The sentences have triggered riots and plunged the country into its worst violence since independence. Some 233 people have now been killed in street protests since January, when the verdicts were first handed down.

Sheikh Hasina’s government says three million people died in the 1971 war, many at the hands of pro-Pakistan militias led by Jamaat leaders who opposed secession from Pakistan on religious grounds. Independent researchers put the death toll of the war between 300,000 and 500,000 people.