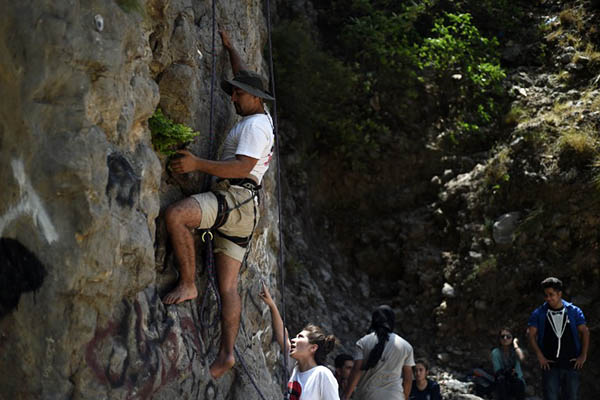 A dozen young men and women stand before a rock face on the outskirts of Islamabad, challenging and cheering each other on as they take turns scrambling up the limestone in front of curious onlookers. The country has long been a magnet for mountaineers, drawn by the grandeur of regions like Gilgit-Baltistan, where three of the world’s greatest mountain ranges—the Karakoram, the Hindu Kush and the Himalayas—collide.

Highlights include the savage K2, the world’s second highest peak at 8,611 meters but often deemed a more challenging climb than the highest, Mount Everest. But despite the tales of glory from professionals, usually from the mountainous north, the sport of climbing has never been particularly popular in the rest of the country.

Until now: Climbing enthusiasts such as Nazir Ahmed, who runs the Eco Adventure Club in Islamabad, which organized the day at the climbing wall for its young members, say there is growing interest in rock and mountain climbing.

“People are attracted to climbing because they are active on social media, they see it on Facebook, on Twitter, on Instagram and get impressed, it’s a good sign,” Ahmed, from the magnificent Hunza valley in Gilgit-Baltistan, says.

He says his club now has 500 members who gather every weekend in the Margallas, the foothills of the Himalayas, which run along the edge of Islamabad—up from 20 when they started four years ago.

Wearing T-shirts and tracksuit bottoms—some are even bare foot—the climbers opt for routes based on their skill level, while their instructor handles the rope and offers guidance.

Most are themselves from Gilgit-Baltistan, a vanguard of dedicated adherents on a mission to spread their love of mountain climbing among the people of the lowlands. And it seems to be working. Many locals start by taking it up as a hobby, before channeling their energies into organized competition.

Adnan Ali Shah, a sociology student at the Quaid-e-Azam University who won a sports scholarship told AFP: “I represented my university twice in inter-university climbing championships and won gold and silver medals.”

Climbing will for the first time be included as an Olympic sport in Tokyo in 2020, potentially giving Pakistan—which sent a team of only seven people to the current Games in Rio—a tantalizing new medal route.

Jamshed Khan, a tall 29-year-old with a piercing green gaze, helped to found the first club in Islamabad with funding from a German NGO in 2007. Its walls stretch 40 feet high with various difficulty levels. The more testing gradients slope backwards, forcing a climber to fight hard not to slip.

In addition to the wall, he and the group “discovered rock [faces] and established routes in the Margallas,” he said.

Not every city is blessed with natural hill and rock faces that allow for climbing, so in 2013 Khan set up a new club and wall in a Lahore park. He said most of the people coming to the park in Lahore were children aged between six to 14. “When we started holding competitions there were hardly 10-12 people but now hundreds participate.”

Around 20 similar clubs have since appeared up and down the country.

Unlike many other sports, climbing is not divided by gender, allowing women to scale new heights in a country where they have not traditionally been given the same levels of opportunities. For some, their inspiration comes from Samina Baig, the first Pakistani woman to scale Mount Everest.

“When a girl from a far-flung area like Gilgit becomes the first Pakistani to scale Mount Everest that’s a big deal,” said Sania Aziz, a student of clinical psychology who hopes to follow in Baig’s footsteps.

While rock climbing makes headway throughout the country, more Pakistanis are taking up mountaineering—a far broader challenge that can include ice climbing, navigation and survival skills—as a profession too.

Now the Alpine Club of Pakistan is organizing joint ventures with foreign expeditions where local members also participate. In these joint expeditions, the foreign climbers are charged only 50 percent of the regular fee but are asked to arrange logistics, such as travel and supplies, for local members in return.

“The aim behind these expeditions is to encourage local climbers and reduce the cost for them,” Manzoor Hussain, president of Alpine Club of Pakistan told AFP.

The initiative may even give Pakistani climbers the chance to go international, he said, such as to attend one of around 30 mountaineering events around the world. “With this new approach we will be able to send our climbing teams abroad to participate in competitions,” he said, citing places like Europe—though after the peaks of Pakistan, even the Alps may seem like a mere uphill climb.