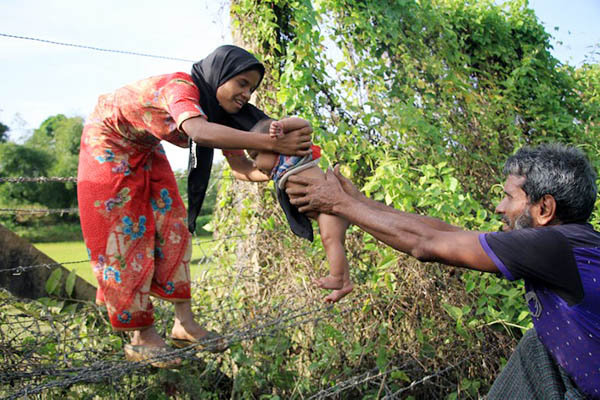 An increasing number of the Muslim minority are joining ranks of militants to combat restrictions, persecution

Heavily pregnant and confined to a squalid Bangladeshi refugee camp, Ayesha Begum does not regret that her husband will miss the imminent birth of their sixth child as he fights alongside Rohingya militants in Myanmar.

Begum, 25, joined the exodus of Rohingya fleeing troubled Rakhine State in recent days as fresh violence erupted between Myanmar’s security forces and militants fighting for the stateless Muslim minority. But like many, her husband stayed behind in Myanmar to join the growing ranks of Rohingya men answering the call to arms against security forces, say relatives and community leaders.

“He took us to the river and sent us across,” Begum told AFP in Kutupalong camp, describing crossing the Naf River by boat with her children into Bangladesh. “He bid us farewell, saying if I live he’d see us soon in a free Arakan [Rakhine state], or else we’ll meet in heaven,” she added, breaking down in tears.

Myanmar’s military reacted with a violent ‘clearance operation’ to sweep out the militants. The U.N. says that crackdown could have amounted to ethnic cleansing.

Despite the sweeps, violence continued as remote villages were hit by near-daily killings of perceived state collaborators attributed to operatives of the Arakan Rohingya Solidarity Army (ARSA). The militants struck again on a large scale on Friday, with scores attacking around 30 police posts in pre-dawn raids, killing at least a dozen security forces using knives, homemade explosives and some guns. This time the security response has seen more than 100 people, including some 80 militants, confirmed killed and prodded thousands of Rohingya civilians to dash for Bangladesh. But the country, which already hosts tens of thousands of refugees from the Muslim minority in the Cox’s Bazar area, has refused entry to any more.

Those unable to sneak in are stranded along the “zero line” border zone, where Bangladeshi officials have noticed a conspicuous absence of men among the civilians crowding the checkposts. “We asked them what happened to their men. They said they all stayed back to fight,” a Border Guard Bangladesh (BGB) commander told AFP, speaking on condition of anonymity.

At the border Rohingya elder Shah Alam, a community leader from Rakhine state, said 30 young men from three villages in his district joined the ARSA “for our freedom.”

“Do they have any other choice? They chose to fight and die rather than be slaughtered like sheep,” he told AFP. The previously unknown militant group has claimed responsibility for the attacks in October and more recent strikes against Myanmar’s security forces, urging fellow Rohingya to join the fight.

The government department directly run by Suu Kyi—the State Counsellor’s Office—has classified the ARSA as “terrorists” and released a flurry of statements and grim pictures of civilians allegedly shot dead by militants. But ARSA’s rallying cry is being answered in Rohingya camps across Bangladesh, despite some doubts over whether their rag-tag units—seemingly mainly armed with knives and homemade weapons—can defeat Myanmar troops.

Many of the displaced Rohingya say they barely escaped with their lives. They describe Buddhist mobs and security forces shooting unarmed civilians and burning down homes, an abuse repeatedly documented in Rakhine since the upswing in conflict. For many, it was the final straw.

“Young people are fed up,” said one prominent Rohingya activist in Bangladesh who asked to remain anonymous. “They grew up witnessing humiliation and persecution, so the current consensus among the Rohingya community is unless you fight, they’re not going to give us any of our rights.”

Outside a camp in Cox’s Bazar two young Rohingya men were anxious to join the fight, describing it as “farz”—a religious duty—to join the “freedom fighters” in Rakhine. “We don’t have any options. Our backs are on the wall. Even the teenagers in our villagers have joined the fight,” one of the men told AFP, vowing “to cross the border on the first chance.”

Just one of Hafeza Khatun’s three sons crossed with her into Bangladesh last month, the older two staying back to fight. But her youngest joined them a week later at his mother’s blessing, returning to battle Myanmar’s security forces “who would kill us anyway” without resistance, she said. “They are fighting for our rights. I sent my sons to fight for independence. I sacrificed them for Arakan,” she said.