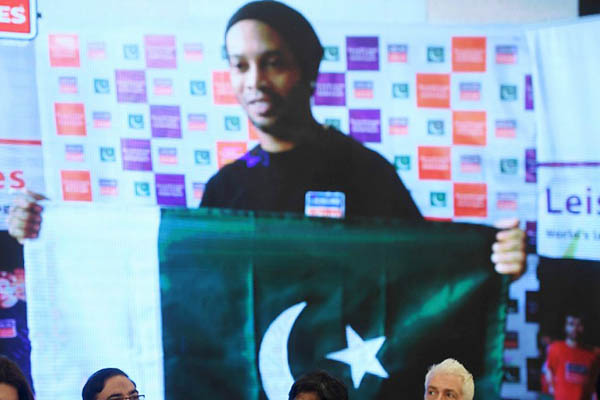 Brazil’s Ronaldinho, England’s David James and Dutch star George Boateng will be among seven top former players to feature in exhibition games in Pakistan in July, organizers said on Thursday.

The games are part of plans to build on the “comfort zone” from the successful staging of the Pakistan Super League cricket final in Lahore earlier this month. Pakistan had been mostly off limits for foreign sports teams since terrorist attacks on the Sri Lankan cricket team’s bus in 2009.

The former players are being brought to the country by the U.K.-based Leisure Leagues—organizers of 5, 6 and 7-a-side tournaments which recently announced plans to expand to Pakistan.

Ishaq Shah, chief operating officer of Leisure Leagues Pakistan, said the stars would play exhibition games alongside local players selected from Leisure Leagues in Karachi, Lahore and Islamabad. “There is no doubt the staging of the PSL has provided a comfort zone and the visit of these foreign stars will rebrand Pakistan as hub of sports,” said Shah, who did not name the other four foreign players.

Pakistan sporting greats including cricket’s Javed Miandad backed the plans, with Miandad saying he was honored to be an ambassador for the league. “Football is the most popular sport in the world and in my playing days I used to follow Newcastle United so once this game is popular in Pakistan people will forget cricket,” said Miandad, who promised a cricket lesson to Ronaldinho and the other foreign players.