Home Lightbox Root Hits Back at Pakistan in Second Test

Root Hits Back at Pakistan in Second Test 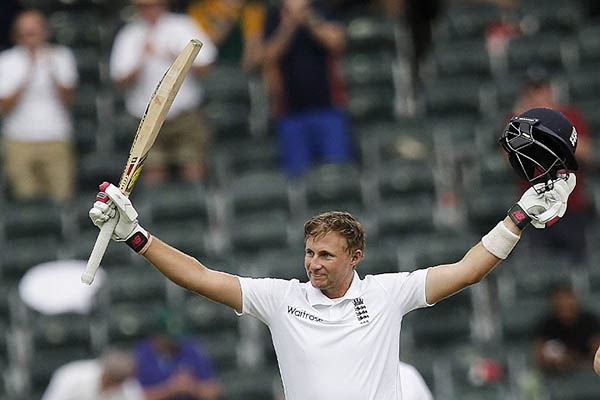 England scored a commanding 314/4 on the first day of the second Test in ongoing series.

Joe Root’s unbeaten 141 was the centerpiece of England’s commanding 314 for four on the first day of the second Test against Pakistan at Old Trafford on Friday.

England captain Alastair Cook, who won the toss on a good pitch and in sunny conditions ideal for batting, made 105 and shared a second-wicket stand of 185 with Root. Having twice got himself out during England’s 75-run defeat by Pakistan in the first of a four-Test series at Lord’s last week, a determined Root did not give a chance in just over six hours at the crease on Friday.

Pakistan’s left-arm pace trio of Mohammad Amir, Rahat Ali and Wahab Riaz became increasingly threatening as the skies clouded over late on. Amir took two for 63 and Rahat two for 69, with both men bowling 20 overs on Friday.

But star leg-spinner Yasir Shah, who took a man-of-the-match winning 10 wickets at Lord’s, returned figures of none for 111 in 31 overs.

“It was a good day,” Cook told Sky Sports. “For Joe also to get a big 100 is vitally important. It was a belting first-day wicket, but there’s signs it might wear and tear so we’ve got to make the most of batting first.”

Root added: “Today we played a lot straighter. There was some frustration from before of not going on for a big score. It was nice to do so today.”

Amir had opener Alex Hales dropped in the gully on six by Asad Shafiq. But three balls later, having repeatedly moved the ball away from Hales, Amir skillfully swung the ball back into the right-handed opener and knocked over his middle and off stumps.

England were now 25 for one after seven overs. Cook cashed in on a rare Shah short ball with a pull to the mid-wicket rope.

Root, in the manner of Yorkshire and England great Geoffrey Boycott, forced both Riaz and Amir through cover-point off the back foot for fours. At lunch, England were 95 for one with Cook 40 not out and Root 41 not out.

Root just beat Cook to the 50 milestone, getting there in 86 balls to the captain’s 90. Cook reached the landmark in style with a straight-driven four—a clear sign he is in top form—off Shah.

A similar stroke saw him into the 90s and raised the 150 stand.

Cook’s two to mid-wicket off Amir saw him to a 100 in 157 balls including 14 fours and the normally restrained Essex batsman celebrated his century with several fist pumps.

Left-handed opener Cook’s 29th Test century meant he extended his own England record and drew the Essex batsman level with Australia great Don Bradman’s tally. Bradman, however, played just 52 Tests while this was Cook’s 131st match in the format.

More significantly, this was Cook’s first century in 20 Test innings since his monumental 263 against Pakistan in Abu Dhabi in October. But Amir then took the shine off an excellent session for England by bowling Cook following an under-edge from a ball that kept low.

That became the last delivery before tea, with England 210 for two at the interval.

James Vince, looking for a maiden Test 50 to cement his place in the side, fell in all too familiar fashion when, on 18, he chased a wide Rahat delivery outside off stump, with his edged drive caught low down by wicket-keeper Sarfraz Ahmed.

What made his dismissal all the worse was that Vince had been dropped by Younis Khan in the slips off a similar shot when on six off Amir.

Root, 87 not out at tea, went to his 10th hundred in 44 Tests with his 14th four in 167 balls when he drove Shah wide of mid-on in textbook fashion. Gary Ballance (23) then helped Yorkshire teammate Root add on 73 before he chopped on against Rahat.

England have not lost a home Test batting first since 2012, a sequence encompassing 10 wins and two draws.