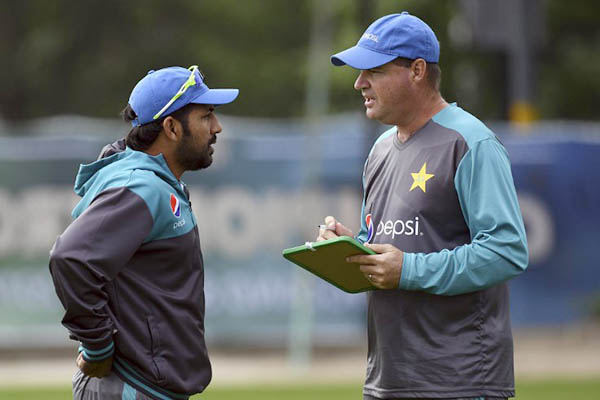 Pakistan captain Sarfraz Ahmed said playing in front of a ‘home’ crowd had helped inspire his side to a shock 19-run win over South Africa in the Champions Trophy at Edgbaston on Wednesday.

Pakistan went from zeroes to heroes in three days, bouncing back from a 124-run thrashing by rivals India to topple the world’s number one-ranked ODI side. Pakistan fans dominated a crowd of more than 16,000, giving it the air of a home game for Ahmed’s men in Birmingham, a city with one of the largest Asian populations in Britain. “That is a feeling we miss, not playing in Pakistan,” said Ahmed. “Maybe that was a difference, the crowd was supporting us and that’s why the players were boosted.”

Pakistan have had to play most of their matches overseas since a 2009 terror attack on the Sri Lankan team bus in Lahore. But chants of “Pakistan Zindabad!” (“Long live Pakistan!”) rang round Edgbaston which was turned into a sea of green.

Ahmed’s side gave their fans reason to cheer when spinners Imad Wasim and Mohammad Hafeez took three early wickets before paceman Hasan Ali removed a trio of middle-order batsmen. Pakistan kept the Proteas to a modest 219 for eight in their 50 overs, having conceded exactly 100 more against title-holders India.

“I think the difference was our bowling and fielding,” said wicketkeeper-captain Ahmed. “Mohammad Hafeez and Imad Wasim bowled really well and they took the pressure off for us,” he said. “We had a good bowling meeting [on Tuesday],” added Ahmed, who saw his attack rebound after India struck 72 from the final four overs of their innings on Sunday. “We took wickets. If you take wickets, every good team feels under pressure.”

Pakistan also improved with the bat after slumping to 164 all out against India. Debutant Fakhar Zaman helped get their chase off to a brisk start. They lost two wickets but Babar Azam (31 not out) and Shoaib Malik (16 not out) took Pakistan to 119 for three off 27, enough for victory by 19 runs on the Duckworth-Lewis method when rain ended the match.

Ahmed praised the way backroom staff led by South African coach Mickey Arthur had helped restore the side’s self-belief. “They backed us after the defeat, they supported us very well, so that’s why we played a good game.”

A feature of Pakistan’s performance against the Proteas was their vastly improved fielding, after a shambolic display against India. Ahmed drew laughter from reporters when he admitted the improvement couldn’t be down to practice. “I think actually we do no fielding at all,” he said. “We had rain the other day, so actually we do nothing.”

The result throws Group B wide open and gives Pakistan a chance of qualifying for the semi-finals when they face Sri Lanka in their final match on Monday.