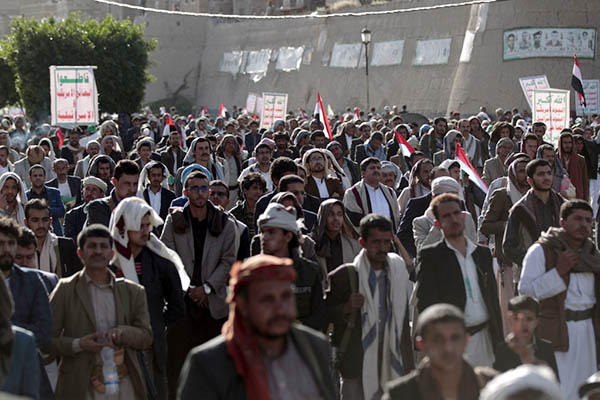 Saudi Arabia gave a cautious response on Saturday to an unexpected offer from Yemen’s Houthi rebels to halt all attacks on the kingdom as part of an initiative to end their country’s devastating war.

The Houthi announcement on Friday came on the eve of the fifth anniversary of the start of the conflict and after a wave of drone strikes on Saudi oil installations a week ago knocked out half of the kingdom’s production. The Iran-backed Houthis claimed responsibility for the attacks, but Riyadh’s ally Washington has condemned them as an “act of war,” placing the blame on Tehran and announcing new sanctions against the Islamic republic.

Saudi minister of state for foreign affairs Adel al-Jubeir took a skeptical position to the announcement from Mehdi al-Mashat, head of the Houthis’ supreme political council, of a “halt of all attacks against the territory of Saudi Arabia.”

“We judge other parties by their deeds, actions and not by their words, so we will see [whether] they actually do this or not,” said the Saudi minister. “And regarding what prompted them to do this… we have to do more intensive studies,” he said at a press conference in Riyadh.

At a ceremony in Yemen’s capital Sanaa on Saturday marking the anniversary of the 2014 rebel seizure of the city, the Houthis again urged Saudi Arabia to take up the offer.

Mohammed Ali al-Houthi, head of the rebels’ Higher Revolutionary Committee and an influential political figure, warned against rejecting the proposal. “If they refuse the initiative we will do them more harm,” he said, adding that “any escalation will be countered by further escalation.”

He spoke before tens of thousands of rebels and their supporters who were gathered in Sanaa for a “freedom and independence” rally that featured speeches, dances and poetry recitals honoring the fighters. Mashat had said that he hoped “the gesture would be answered by a stronger gesture” from the Saudis, according to the rebels’ Al-Masirah television channel. “Pursuing war is not in anyone’s interest,” he added.

The plan calls for rebels to “stop all attacks on Saudi territory by drones, ballistic missiles and other means,” he said. He also urged the reopening of Sanaa’s international airport and open access to Yemen’s Red Sea port of Hodeida, a crucial entry point for imports and humanitarian aid.

The announcement was a sharp reversal from previous statements from the Houthis, who earlier on Friday had accused Saudi Arabia and its allies of endangering the fragile truce around Hodeida with strikes on rebel targets north of the port.

The Houthis have been fighting against a Saudi-led coalition that intervened in 2015 to support the country’s internationally recognized government. Iran denies U.S. and Saudi accusations that it arms the Houthis.