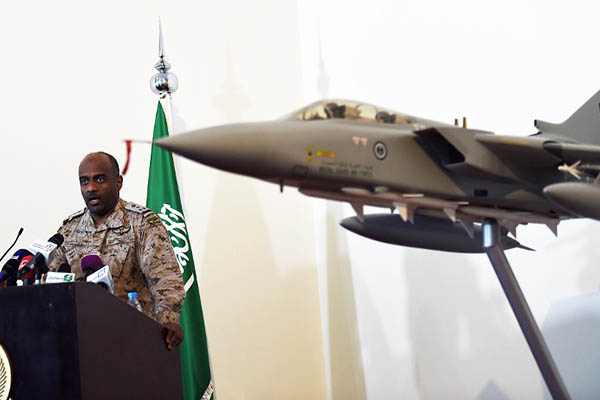 Saudi artillery pounded positions inside Yemen on Sunday after renewed rocket fire wounded four women, the Saudi-led coalition said while also countering suggestions that its aerial bombing has been “indiscriminate.”

In an interview with AFP, coalition spokesman Brigadier General Ahmed al-Assiri said Saudi-led forces will continue retaliating against targets over the border until the proposed 11:00 p.m. Tuesday ceasefire, “if they continue to fire their rockets towards our cities, our population.”

Saudi Arabia announced the ceasefire date on Friday after more than six weeks of bombing Iran-backed rebels in Yemen, but said the rebels will also have to abide by it. At the same time, the coalition conducted a record number of sorties—more than 130 from Friday to Saturday—after declaring the rebels had crossed a “red line” with deadly mortar and rocket bombardments of Saudi Arabia last week.

On Sunday, four Katyusha rockets hit a house in the Saudi border region of Najran, wounding four women and sparking return artillery fire, Assiri told AFP. Shells from Yemen last week killed several people in the border region, the first attacks on populated areas of the kingdom since the coalition on March 26 began airstrikes aiming to stop an advance by the Shia Houthi rebels.

In a clear reference to the Saudi-proposed truce, Houthi television on Sunday said the rebels have agreed to respond “positively” to efforts to “end the suffering” in Yemen.

“Such militia should be judged by their acts, not by what they say in the media,” Assiri said. “Let’s wait [until] Tuesday 11:00 p.m.”

The United Nations has called repeatedly for a ceasefire after weeks of fighting that have killed more than 1,400 people, many of them civilians, and displaced at least 300,000. Coalition warplanes struck the Houthi stronghold of Saada in Yemen’s northern mountains for a second straight night Saturday after declaring the whole province a military target.

The U.N.’s humanitarian coordinator for Yemen, Johannes van der Klaauw, said on Saturday he was “deeply concerned” about the airstrikes on Saada, “where scores of civilians were reportedly killed” and thousands forced to flee. “The indiscriminate bombing of populated areas, with or without prior warning, is in contravention of international humanitarian law,” he said.

Amnesty International on Friday said it had gathered eyewitness testimony pointing to “a repeated failure” by the coalition to take adequate precautions against civilian deaths. But Assiri emphasized: “We do not conduct any operation in cities” even though Houthis hide with their weapons among the population. “We had from Day One the restriction from our leaders,” he said.

The coalition has intelligence that a major hotel where foreigners stay in the rebel-controlled capital Sanaa is being used by the Houthis as a communications center and ammunition store, Assiri said. “And we avoid to target,” he said.

On April 21 the coalition said it was ending its air campaign and moving to a new phase, although bombing has continued in support of pro-government forces on the ground. The Saudi defense ministry said it had managed to “successfully remove threats to Saudi Arabia’s security and that of neighboring countries” by destroying heavy weaponry and ballistic missiles seized by the rebels.

Asked how the rebels were able to strike the kingdom if the threat had been removed, Assiri said: “Imagine if they fired Scuds instead of Katyusha, what would be the result? They were controlling the Scuds.”

Scud ballistic missiles have a much longer range and more powerful warhead than the rockets and mortar bombs that have struck the kingdom.

“From Day One, when we talked about the air campaign one of the most important targets was to find those Scuds and to destroy them. This is what we did,” Assiri said.

On Sunday, military officers from Malaysia arrived in the kingdom to discuss what role they can play in the Arab-dominated coalition, he added. Last week the West African nation of Senegal announced it would send 2,100 soldiers. Assiri said there have not yet been further discussions, but coordination will continue as to how Senegal can help.