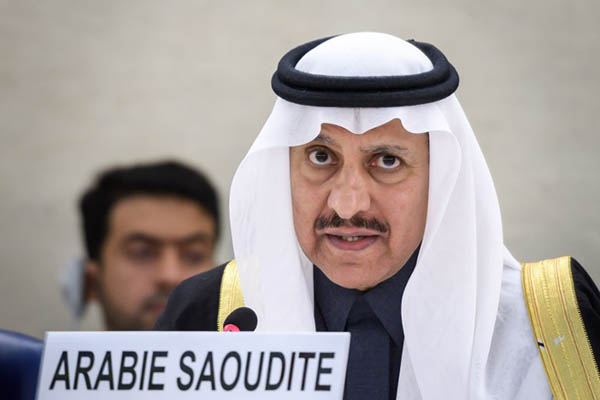 Saudi Arabia on Thursday reiterated its rejection of calls for an international, independent investigation into the murder of journalist Jamal Khashoggi, insisting it was well equipped to bring the perpetrators to justice.

The head of a Saudi delegation speaking before the U.N. Human Rights Council in Geneva insisted that his country was taking all the “measures required for us to resolve this heinous crime.”

Bandar Al-Aiban, who heads Saudi Arabia’s human rights commission, stressed though that any calls to “internationalize” the investigation “amount to an interference in our domestic affairs.” Aiban was in Geneva presenting his country’s response to a review of its rights record before the council last November, during which it faced a barrage of criticism from countries over the Khashoggi murder.

His presentation came after 36 countries last week issued a joint statement demanding justice following the killing, in an unprecedented rebuke of the oil-rich kingdom at the rights council.

Khashoggi, a Washington Post contributor and critic of Crown Prince Mohammed bin Salman, was murdered at the Saudi consulate in Istanbul on Oct. 2. Saudi Arabia initially said it had no knowledge of his fate. It has since blamed rogue agents for Khashoggi’s death and the kingdom’s public prosecutor has charged 11 people over his murder.

Aiban insisted that his country was “horrified by what has happened pursuant to this unfortunate accident.” He told the council that most of the recommendations Riyadh had received regarding how to pursue the Khashoggi case during the so-called Universal Periodic Review (UPR) in November were already guaranteed by its constitution.

The suspects, he said, “were entitled to a fair trial… and none of their human rights have been violated, and they have been subjected to no form of torture or cruel and inhuman treatment.”

“They are entitled to legal council, and they have also been informed of their rights to resort to the services of council during the investigation phase and during the trial,” he said.

Aiban said that there had so far been three hearings, and that the accused and their lawyers had been present. He also said “representatives of international organizations as well as NGOs and other stakeholders… were able to monitor and see how the court cases were unfolding,” but did not specify which organizations had been permitted into the proceedings.

But he said Saudi Arabia could not accept recommendations during the UPR for the country to allow international experts to participate in the investigation and to oversee the process. “Saudi Arabia is a sovereign country… Such demands made upon us are tantamount to the international community doubting the integrity of our judicial apparatus and doubting the independence of our judiciary,” he said.