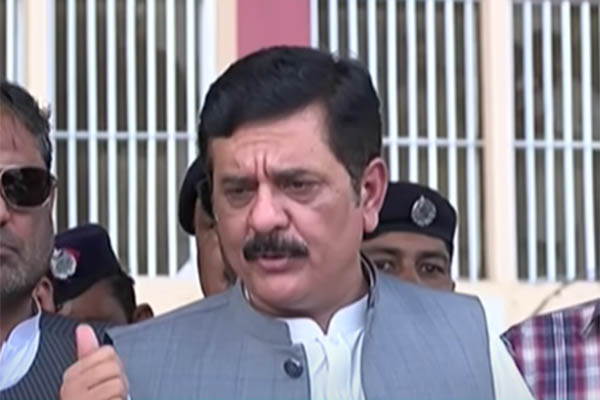 Gill was arrested last week for allegedly seeking to incite the public against the armed forces and sedition in a statement to ARY News. A case has been registered against him at the Kohsar Police Station under several sections of the Pakistan Penal Code, including 124-A (sedition), 131 (abetting mutiny, or attempting to seduce a soldier, sailor or airman from his duty), 153 (wantonly giving provocation with intent to cause riot if rioting be committed; if not committed), 153-A (promoting enmity between different groups, etc), and 505 (statements conducing to public mischief), 506 (punishment for criminal intimidation), among others.

The PTI, including ousted prime minister Khan, has repeatedly alleged that Gill has been tortured by police. In an interview with private broadcaster GNN on Monday, Khan alleged Gill had been stripped and beaten up and was being “pressured” to turn against him. The claims have raised questions from observers, as Gill is currently imprisoned in Rawalpindi’s Adiala Jail, which falls under the purview of the Punjab government led by a coalition comprising the PTI and the Pakistan Muslim League (Quaid).

On Tuesday, authorities shifted Gill to the jail hospital, with reports that the government was now trying to shift him to a government medical facility in Rawalpindi. Speaking with media after the transfer, the home minister said Gill was “perfectly all right” and there was no chance of him being tortured, adding there was no need of a new medical examination. Stressing that he had personally met Gill to determine the detained PTI worker’s health, he added: “I will brief the PTI chairperson regarding the health conditions of Gill.”

Rebutting further claims by the PTI that its leaders were not being allowed to meet Gill in jail, he said the PTI worker had met several members of the party leadership. To a question, he stressed that Gill was a prisoner of the federal government and the Punjab government was merely his custodian.

To another question, Dogar said he did not support Gill’s statement on the armed forces. “Absolutely not,” he added. In a subsequent posting on Twitter, he said that while there was no evidence of torture, he had recommended the removal of jail officials for keeping Gill in a “special cell” in violation of rules.

Shortly after, another PTI minister—Punjab Parliamentary Affairs Minister Raja Basharat—announced that jail staff was being removed from their posts for “illegal” actions. Without specifying the nature of the alleged illegality, he wrote on Twitter: “DIG and Superintendent Adiala Jail are being removed from their posts on their criminal silence about illegal actions being done with political prisoner.”

Gill, currently on judicial remand, has thus far been unable to secure bail, as police maintain they require an extension to his physical remand for further investigations. On Tuesday, the Islamabad High Court directed the relevant sessions court to examine the government’s plea against the rejection of the physical remand of Shahbaz Gill and render its verdict on merit.