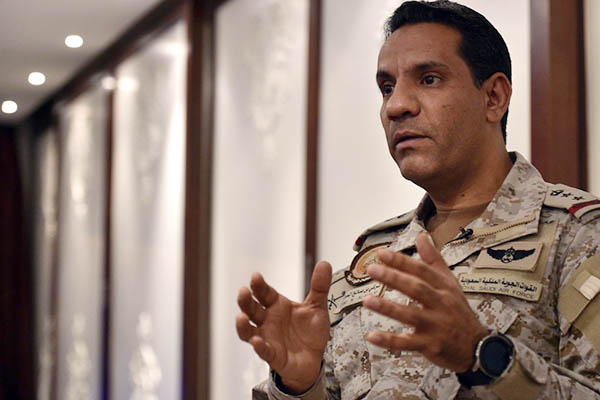 The weapons used to strike Saudi oil facilities were Iranian-made, the Riyadh-led coalition said on Monday, heightening fears of regional conflict after the U.S. hinted at a military response to the assault.

Yemen’s Iran-aligned Houthi rebels claimed responsibility for the operation but Washington has squarely blamed Iran, with President Donald Trump saying the U.S. is “locked and loaded” to respond.

U.S. Defense Secretary Mark Esper said the U.S. was preparing a response. “The United States military, with our interagency team, is working with our partners to address this unprecedented attack and defend the international rules-based order that is being undermined by Iran,” he said in a tweet.

Saudi’s energy infrastructure has been hit before, but this strike was of a different scale, abruptly halting half the OPEC kingpin’s output—some six percent of the world’s oil supply.

The Saudi-led coalition, which is bogged down in a five-year war in neighboring Yemen, reiterated the assessment that the Houthis were not behind it, pointing the finger at Iran for providing the arms. “All indications are that weapons used in both attacks came from Iran,” rather than Yemen, coalition spokesman Turki al-Maliki told reporters in Riyadh, adding that an investigation was underway.

The Houthis said they had fired 10 drones at the Saudi installations, and Iranian President Hassan Rouhani said the attacks were in self-defense. “The people of Yemen have been forced to respond, they are only defending themselves,” he told a news conference in Ankara alongside Putin and Turkish President Recep Tayyip Erdogan. But the New York Times reported that U.S. officials had satellite images showing the attacks, possibly with drones and cruise missiles, had come from the north or northwest. That indicated they were fired from the northern Persian Gulf, Iran or neighboring Iraq, where Iran backs various armed groups.

Washington called the assault, which sparked huge fires in the heart of Saudi Arabia’s oil industry, an “unprecedented attack on the world’s energy supply.”

NATO chief Jens Stoltenberg told AFP in Baghdad on Monday that he was “extremely concerned” about escalating tensions following the attacks, and accused Iran of “destabilizing” the region. In Ankara, Russian President Vladimir Putin offered to sell Saudi Arabia a missile defense system.

Analysts noted the attacks had exposed the vulnerability of oil installations despite the kingdom splurging billions on sophisticated defense hardware. “Saudi Arabia has to consider its own vulnerability in launching any form of retaliation against Iran,” said Anthony Cordesman, from the Washington-based Center for Strategic and International Studies. “The U.S. has to consider the impact of any such escalation on further cuts in Gulf petroleum exports and imports as a result of the fighting.”

Oil prices saw their biggest inter-day gain since the 1991 Gulf War on Monday, fueling fears for the global economy. Europe’s benchmark Brent crude surged by 20 percent and U.S. counterpart WTI by 15 percent as commodities trading got underway. Both later receded, but remained up by more than 10 percent on the day by mid-afternoon in Europe.

The attack is a major test for Saudi Arabia as it could dampen investor confidence ahead of Aramco’s mammoth stock flotation, a listing the government hopes will generate up to $100 billion to fund economic diversification projects.

Saudi authorities are considering whether to delay the oil giant’s initial public offering, people with knowledge of the matter said. “They’re in the process of assessing the damage. It’s a possibility but it’s still very early,” said one source, who spoke on condition of anonymity.

The IPO, earlier scheduled for 2018, has already been mired in delays as it reportedly struggled to reach a $2 trillion valuation desired by Saudi rulers.

Seeking to soothe market concerns, new Saudi Energy Minister Prince Abdulaziz bin Salman on Sunday said the kingdom would use its vast inventories to partially compensate for the lost production. The U.S. has also said it will tap into its reserves.

The kingdom has a spare capacity of around two million bpd that it can draw on at times of crisis.

Saudi Arabia is racing to restore its lost production, but the extent of the damage at the plants remains unclear and the Energy Intelligence group said some of the repair work could take “several weeks.” Saudi economic consultant Sulaiman al-Assaf warned that a prolonged production delay could push prices into “triple digits,” a development that would strain the already slowing global economy.