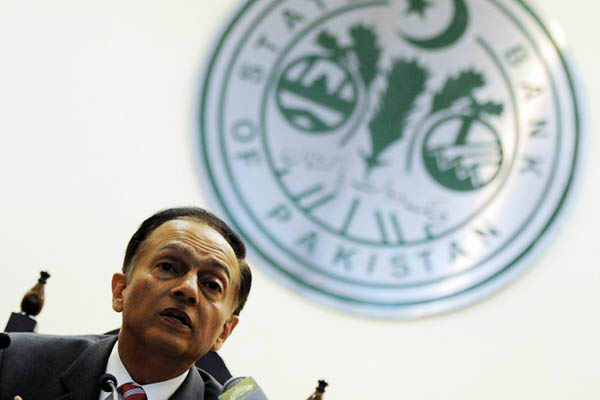 The governor of Pakistan’s central bank has resigned, finance ministry officials said Friday, on the eve of an International Monetary Fund review into a $6.7 billion bailout loan.

Yaseen Anwar was appointed governor of the State Bank of Pakistan in October 2011. He resigned on Thursday citing personal reasons, said finance ministry spokesman Shafqat Jalil. The government on Friday appointed deputy governor Ashraf Mahmood Wathra as the acting governor until further notice, the finance ministry said in a statement.

The IMF approved the package for the country in September last year, subject to strict economic reforms, particularly in its troubled energy sector and tax system. Finance ministry officials confirmed that talks between Pakistan and IMF officials for the third tranche of $545 million were due to be held from Saturday in Dubai.

“The resignation of the SBP governor is not going to have any impact in our review talks with the IMF,” said a senior finance ministry official. “The talks would focus on the review of economic situation of Pakistan in the second quarter (October-December),” the official said. “The government has fulfilled all the conditions under the IMF’s Extended Fund Facility and we hope to get the funds by March,” the official added. The announcement of the appointment of a new governor was expected later Friday, the finance ministry spokesman said.

Leading English newspaper The News quoted Anwar as saying that he stepped down to spend more time to his family. “There are personal reasons and particularly due to recent injury of my son that compels me to move and stay together with my family especially after having served at SBP for almost seven years as governor and deputy governor through very challenging times amidst financial turmoil globally,” The News quoted Anwar as saying.

Analysts said that with his resignation, long-drawn confusion over fiscal policy in Pakistan would come to an end. The previous Pakistan Peoples Party government had appointed Anwar, and a change at the head of the central bank had been seen as inevitable since Prime Minister Nawaz Sharif of the Muslim League took charge in June.

“His resignation was expected because of the political change in the government,” said Taha Khan, head of research at Taurus Securities. “There were some policy differences as well between the ministry of finance and the SBP,” he added.

In a belated annual report earlier this month, the central bank estimated economic growth for the current fiscal year of up to four percent, surpassing forecasts by international agencies. “SBP projects GDP growth in the range of 3-4 percent for FY14 which is higher than the IMF’s growth forecast of 2.5 to three percent,” the bank said.

It forecast that the three-year loan deal should bring stability to the domestic foreign exchange market during the current fiscal year. In the last fiscal year, Pakistan’s economy grew at 3.6 percent, the bank said, and inflation fell to single digits. But it warned inflation could rise as high as 11 percent in the current fiscal. Economists say growth needs to be seven percent to absorb the country’s booming population.