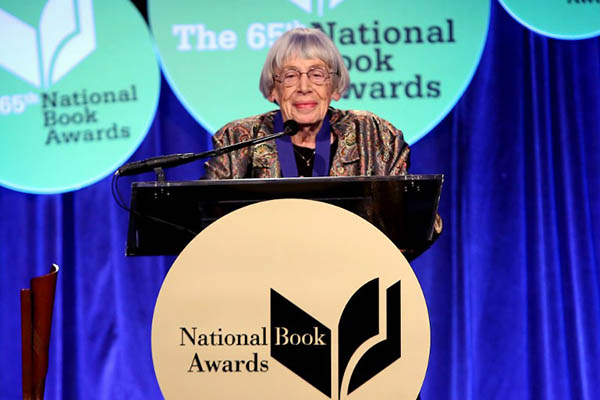 Tributes pour in for award-winning author, who published over 20 novels

Ursula K. Le Guin, the award-winning U.S. science fiction and fantasy author, and avowed feminist whose books have sold millions worldwide, has died, her family announced on Tuesday. She was 88.

Le Guin is best remembered for global bestselling Earthsea series, translated into many languages and adapted for the screen, in which an apprentice sorcerer fights against the powers of evil, decades before Harry Potter did the same.

In a career that spanned decades, she published more than 20 novels, wrote children’s books, dozens of short stories, volumes of poetry and collections of essays.

Tributes quickly poured in, with American horror writer Stephen King mourning her as “one of the greats,” after Le Guin’s family announced her death on Monday. “Not just a science fiction writer; a literary icon. Godspeed into the galaxy,” tweeted King.

She was born in October 1929 in Berkeley, California, the daughter of anthropologist Alfred Kroeber, an expert on Native Americans, and Theodora Kroeber, who wrote Ishi in Two Worlds an acclaimed biography of about “the last wild Indian” in North America.

From childhood, she steeped herself in anthropology, mingling with her parents’ guests—fellow academics and visitors from around the world, including Native American friends, spending the summers at a ranch her father had bought in Napa Valley.

Educated at Radcliffe College, Massachusetts, and New York’s Columbia University, Le Guin was a Fulbright Fellow in 1953, traveling to Paris, where she married her husband, the historian Charles Le Guin before the couple returned to the United States. They settled in Portland, Oregon where they raised three children and Le Guin embarked on her prolific literary career.

“I didn’t want to be a writer and lead the writer’s life and be glamorous and go to New York. I just wanted to do my job writing, and to do it really well,” she told The Paris Review in an interview from her family home in 2013.

Le Guin published her first novel, Rocannon’s World, in 1966 but found breakthrough success with the publication in 1969 of The Left Hand of Darkness, which won a litany of prizes and became a great science fiction classic.

The novel, the beginning of the Hainish Cycle, which contains six other titles, broke with the sclerotic patterns of science fiction’s golden age. The planet on which The Left Hand of Darkness is based is little different from the Earth, except for its glacial climate, but the beings who populate it are radically different: they have only one sex and assume in turn masculine and feminine roles.

In the book she posed questions on sexual identity, and questions what social rules, culture and inner life such a world could exude. “Where I can get prickly and combative is if I’m just called a sci-fi writer. I’m not. I’m a novelist and poet,” she told The Paris Review. “Don’t shove me into your damn pigeonhole, where I don’t fit, because I’m all over. My tentacles are coming out of the pigeonhole in all directions.”

In her stories of galactic societies, Le Guin—who was profoundly influenced by Taoism and Buddhism—sought to prove there is no total and permanent solution, either in theology, politics or human science past or future. “I draw on the social sciences a great deal,” she told The Paris Review. “Particularly from anthropology. When I create another planet, another world, with a society on it, I try to hint at the complexity of the society I’m creating.”

Awarded the Medal for Distinguished Contribution to American Letters at the 2014 National Book Awards, she urged publishers and writers to put less emphasis on profit. “The profit motive is often in conflict with the aims of art,” she said. “I have had a long career and a good one, in good company. Now here at the end of it, I really don’t want to watch American literature get sold down the river.”