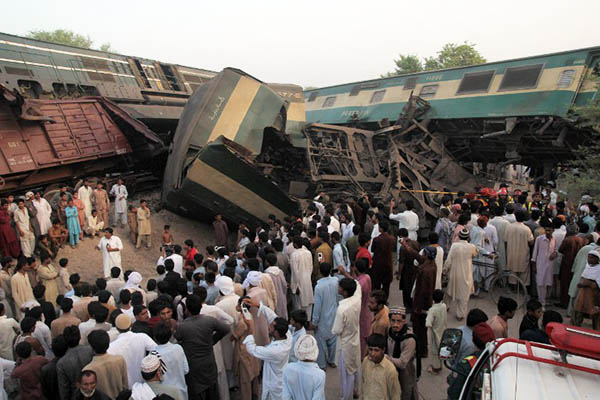 At least four people were killed and over 100 others injured when two trains collided in central Pakistan early on Thursday, officials said.

The accident occurred near Multan around 2:30 a.m. when the Karachi-bound Awami Express passenger train rammed into a goods train that had stopped after running over a man crossing the railway track.

TV footage showed rescue officials working around crumpled and overturned bogies in the darkness. Chatta said several trapped passengers had to be extracted from their carriages. A three-day public holiday for the festival of Eid ul-Azha ended on Wednesday, with many returning from their family homes to the cities where they work.

Railway official Saima Bashir blamed the accident on the passenger train driver, saying he failed to heed a red signal that went up after the goods train had stopped.

Train accidents are common in Pakistan, which inherited thousands of miles of track and trains from former colonial power, Britain. The railways have seen decades of decline due to corruption, mismanagement and lack of investment.

Last November, 19 people were killed in Balochistan province after a train’s brakes failed and it sped down the side of a mountain.

In July 2015, at least 17 people were killed when a special military train fell into a canal after a bridge partially collapsed.