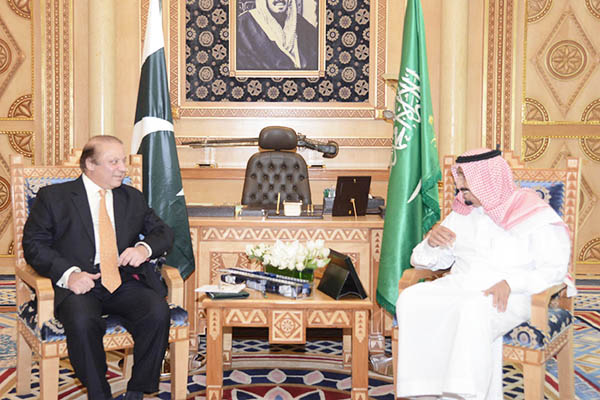 Pakistani official says there is no bad blood between Riyadh and Islamabad over Parliament’s decision against joining coalition.

Prime Minister Nawaz Sharif expressed “solidarity” with Saudi Arabia during a visit on Thursday after Parliament refused to send forces to help a Saudi-led coalition in Yemen, a Pakistani official said.

Sharif arrived with a powerful delegation, including Army chief General Raheel Sharif and Defense Minister Khawaja Asif, who met King Salman and other top government officials. “The main focus was for solidarity with Saudi Arabia” in line with earlier commitments from Islamabad to defend the kingdom’s territorial integrity, said the official.

A Saudi-led coalition conducted a 27-day campaign of airstrikes in Yemen aimed at halting the advance of Iran-backed Shia Houthi rebels and their allies.

On Tuesday night the coalition said it was starting a new phase aiming to resume Yemen’s political process, deliver aid and fight “terrorism,” as airstrikes continued. Pakistan has remained ostensibly neutral in the conflict.

The Houthis, allied with army units loyal to former president Ali Abdullah Saleh, are fighting forces on the side of coalition-backed President Abedrabbo Mansour Hadi, whose government has sought refuge in Riyadh.

In a unanimous resolution it backed the government’s commitment to protect Saudi territory, which was not directly threatened during the conflict although there were armed skirmishes along the border.

The Pakistani official said Parliament’s decision was “not at all” a point of contention with the Saudis. “The two countries have the type of relations which are pretty mature. They understand what Parliament’s position was,” he said, asking for anonymity.

Pakistan has deep military ties with Saudi Arabia and has long benefited from the oil-rich kingdom’s largesse. But it has been reluctant to become ensnared in a conflict with sectarian overtones while violence against minority Shias rises at home.

Some analysts saw Sharif’s trip as an attempt to pacify the Saudi royal family, with whom he has close personal ties after they sheltered him during his years in exile.