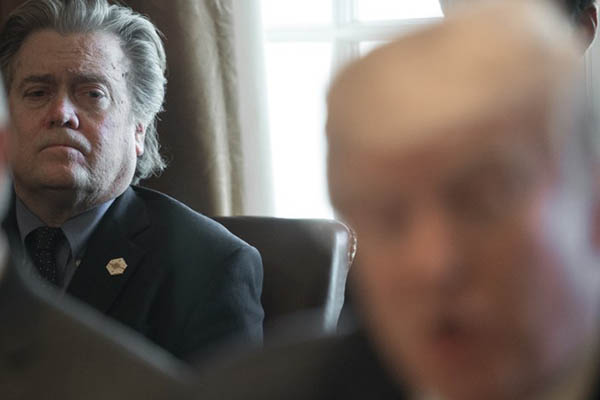 In the white-hot battle for influence in U.S. politics the Republican establishment has regained the upper hand, after Donald Trump unleashed a scalding repudiation of Steve Bannon, self-proclaimed champion of the anti-Washington populism that swept the president to power.

Traditional conservatives and rabble-rousing populists have long competed for the ear of the president, who appeared to revel in casting the rival forces off one another. More often than not Trump has aligned with the Republican leaders in Congress, an arranged marriage of sorts.

But for months the president also let firebrand Bannon, as his top aide in the White House, conduct open war against what he calls the Washington “swamp”—including party leaders, incumbent lawmakers and other heavyweights—all of whom, according to Bannon, undermine Trump’s populist revolution. Now the man who cast himself as supreme defender of Trumpism stands well outside the ring of power, banished by the president and rejected by his most prominent donors.

Bannon emerged from relative obscurity when Trump picked him as campaign chief in August 2016, just three months from the presidential election. At the time, he was running Breitbart.com, a conservative website that provided boisterous coverage of Trump’s rise. Bloomberg had called him “the most dangerous political operative in America.”

Soon Bannon presided over the brand of economic populism promoted by Trump, and while the president always contested descriptions that he was under Bannon’s influence, he nevertheless hired him as chief strategist.

After several hectic months, Bannon exited the White House, although the two men had apparently remained on good terms.

Bannon returned to Breitbart and control of his media “weapons.” His goal: help defeat establishment Republicans in 2018’s congressional primaries and eventually bring down Senate Majority Leader Mitch McConnell, an arch-nemesis. But the first candidate under his wing, Roy Moore of Alabama, did something the conservative state had not seen in 25 years: lose to a Democrat. The defeat was a stinging blow to Bannon’s reputation.

The second act in his rapid decline came this week in book form, an explosive West Wing expose in which Bannon is quoted making unflattering remarks about the president and his family.

Trump responded with a scathing statement, saying Bannon had “lost his mind” and has nothing to do with the president. Through Twitter, Trump branded him “Sloppy Steve.” Others piled on. House Republican Adam Kinzinger on Thursday called Bannon’s views “a cancer to our democracy.”

Many Republican candidates had sought Bannon’s blessing for the upcoming primaries as a way to gain credibility as true Trumpists—a support that would result in media coverage (through Breitbart and others) and financial backing from key donors. But with the Bannon label no longer synonymous with Trump, these populist candidates suddenly face a stark choice. Some issued statements re-iterating their loyalty… to the current White House occupant.

Those in the party’s establishment wing fired back against insurgent candidates, warning they were associates of a man who insulted the president.

For despite his unpopularity among the broader electorate, Trump remains the sole popular and unifying figure among conservatives. Fully 82 percent of Republicans approve of the president, according to a recent Gallup poll.

Even Bannon’s most important ultra-conservative donors, the billionaire Mercer family, have severed ties as the strategist’s allies begin shrinking away. Rebekah Mercer reiterated her support for Trump “and the platform upon which he was elected.”

Her family has not communicated with Bannon “in many months” and has provided no financial support, “nor do we support his recent actions and statements,” she told The Washington Post.

In Washington, party dignitaries are jubilant. A smile crossed McConnell’s face on Thursday when he said he supported “what the president had to say” about his former White House aide. “Trump would have won the presidency without Bannon,” added former House speaker and Trump ally Newt Gingrich, while the veteran Republican strategist Ed Rollins confidently predicted on Fox Business Network: “I think it’s the end of Bannon.”