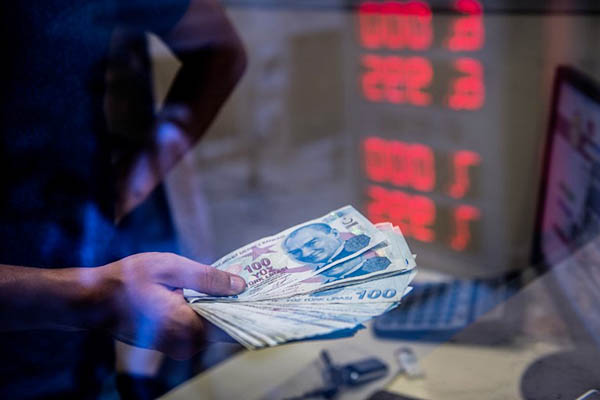 The collapse of the Turkish lira has caused trauma as Turks see their purchasing power slashed, but bargain-hunting foreign tourists visiting the country at the peak of the summer season are cashing in on a currency windfall.

Visitors, mainly from Saudi Arabia and Asia, formed long queues in Istanbul outside luxury stores like Louis Vuitton, Chanel and Prada after the lira took a severe hit against dollar, losing over 16 percent of its value on Friday.

“Everything is getting cheaper and cheaper,” said Saudi Arabian tourist Nasir El-Nabir, outside a chic store in an upscale Istanbul neighborhood. “It’s like a 30 percent sale, so I am really affected in a positive way.”

Laden with shopping bags, tourists have enjoyed a shopping bonanza before retailers hike prices to take account of the lira’s devaluation, under the slightly bewildered gaze of Turks who have borne the brunt of the crisis.

The queues suggest that the plunge in the lira, driven by Turkey’s bitter dispute with the United States, is set to give a boost to the key tourism industry, which struggled greatly after a failed coup and terror attacks in 2016.

The lira’s plunge—which had been ongoing for weeks—was turned into a rout on Friday when U.S. President Donald Trump tweeted that Washington was doubling aluminum and steel tariffs for Turkey.

The Turkish currency has since clawed back some ground.

Xenos Lemis, a tourist from Cyprus, said he had been following the currency drama in real time. “We check the price of the lira every two hours and there is a significant change. So for shopping for a tourist, this is a blessing,” he added.

But some visitors lamented that they also lost money when they converted a large sum of foreign money to the Turkish currency just before the crisis broke.

“I’m quite surprised because I took a lot of cash from the bank in lira and when I woke up in the morning I found out that I almost lost [the equivalent of] one hundred or two hundred during one night,” Kobe Wu Kejia, a Chinese tourist, told AFP. “This is pretty scary.”

Turkey’s tourism sector, which came under severe pressure due to the attacks and failed coup of 2016, had already appeared to have sprung to its feet this year despite the country’s economic woes. The industry has managed to diversify its appeal, with sharp rises in the numbers of visitors arriving from countries like Iran and Saudi Arabia, while traditional tourism from Europe also revived.

Meanwhile, Russian tourism—critical for the economy on Turkey’s Mediterranean coast—has also sprung back to life after being devastated by a political crisis between Ankara and Moscow in 2015.

Firuz Baglikaya, head of the Association of Turkish Travel Agencies (TURSAB), said there was a 30 percent increase in tourism in Turkey compared to last year. “We expect a $32 billion foreign currency inflow,” he told the state-run Anadolu news agency. “We have a target of having 40 million tourists since 2017, and if there’s nothing negative, this objective will be achieved.”

Package holiday giant Thomas Cook said this month, before the lira crisis struck in earnest, that it has seen a 63 percent increase in bookings for Turkey from last year, with Antalya now its most popular airport for British holidaymakers.

In Istanbul’s historic Eminonu neighborhood, tourists expressed mixed feelings about their cheaper vacation in Turkey. “In the first place of course it’s an advantage for us,” German tourist Barbara said on the Golden Horn, walking with her husband. “But in second place we also feel kind of sorry because the men in the shop do not earn so much anymore for what it’s worth. So there are these two sides.”

Martin Bifrare, from Switzerland, said he might extend his family vacation with his wife and children over the currency difference. “With this economic situation, we could decide, for example, to stay an extra week or to allow ourselves a few excursions that we wouldn’t necessarily have done otherwise,” he said.