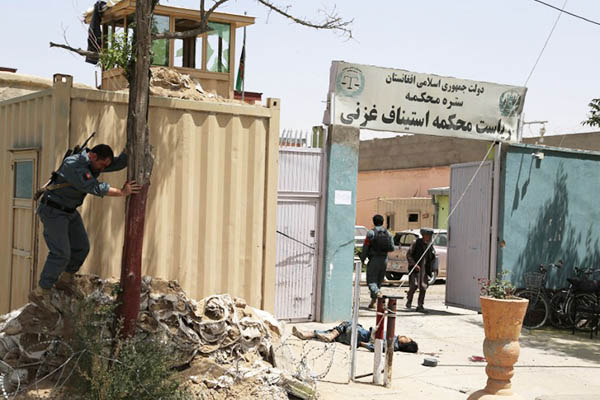 Taliban suicide bombers wearing police uniforms raided a courthouse in the eastern Afghan city of Ghazni Wednesday, killing six people in what they said was revenge for last month’s execution of Taliban-linked prisoners.

The assault comes a day after the Taliban killed 10 bus passengers and kidnapped dozens of others in northern Kunduz province, as the insurgents step up their annual spring offensive after naming a new leader.

“Four attackers entered the court compound after killing the guard,” provincial police chief Aminullah Amarkhail told AFP. “One of the attackers detonated his suicide vest inside the compound and the three others were gunned down by police.”

The interior ministry said five civilians and one policeman were killed in the 30-minute assault, which left bloodied corpses littered around the complex.

The Taliban said the attack was in retaliation for the execution of six Taliban-linked inmates in early May, which were approved as part of President Ashraf Ghani’s new hardline policy against the insurgents. On Tuesday the Taliban killed 10 people after pulling them off buses in the northern province of Kunduz, officials said, revising down their earlier toll of 16.

The insurgents also kidnapped dozens of passengers, saying they were targeting Afghan security officials aboard the buses passing through the insurgency-prone district of Aliabad. Most of the passengers have since been released but a handful are still in Taliban captivity, officials said, without giving a precise number.

The violence underscores Afghanistan’s fragile security situation as the militants intensify assaults against government forces after launching their spring offensive in April.

The Taliban last week announced Haibatullah Akhundzada as their new leader, elevating a low-profile religious figure in a swift power transition after officially confirming the death of Mullah Mansour in a U.S. drone strike. The drone attack was the first known American assault on a top Afghan Taliban leader on Pakistani soil.

Mansour was killed just nine months after being formally appointed leader following a bitter power struggle upon the confirmation of the death of Taliban founder Mullah Omar. On Tuesday Pakistan said his body had been handed back to his family.