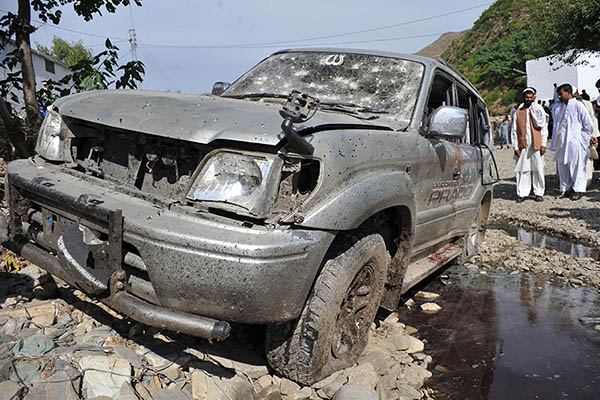 Police inspect the site of a suicide bombing in Swabi, 2011. Hasham Ahmed—AFP

A bomb targeting a tribal elder allied to the government killed six people and wounded 11 in Pakistan’s northwest on Monday, police said.

The attack took place in the town of Doaba near the tribal belt where Taliban and other Al Qaeda-linked militants have strongholds.

“A remote-controlled device planted in a vehicle owned by Malik Habibullah, a local pro-government elder, went off, killing six people and injuring 11 others,” said local police chief Sajjad Khan. He said Habibullah was not in the car when the bomb exploded.

President Asif Ali Zardari condemned the attack and expressed his “heartfelt sympathies with the bereaved families.”

Pakistani troops have for years been locked in deadly battles with domestic insurgents in parts of the northwest. The United States has in the past accused Pakistan of not doing enough to crack down on the militants, who also plot attacks on Western targets and in neighboring Afghanistan.

Elsewhere in the northwest, two policemen were killed while defusing a bomb in the district of Swabi, police said.

“The two policemen had already defused four bombs planted near a government-run boys’ school in the area but a fifth bomb exploded while being defused, killing both of them,” according to local police chief Mian Muhammad Saeed.