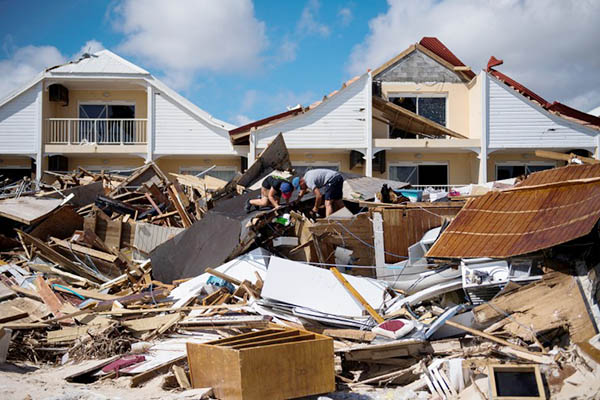 People on the islands of Saint Martin and Saint Barts on Sunday contemplated the task of rebuilding their lives after Hurricane Irma destroyed homes and roads and knocked out power and water.

The monster storm ripped through the two islands, leaving most of the 80,000 inhabitants homeless and causing crippling shortages of essentials. “Is there still a life here?” wondered Michelene Jean-Charles, a heavily pregnant 23-year-old resident of St. Martin, which is divided between France and the Netherlands.

Some 70 percent of the infrastructure on the Dutch side, which is known as Sint Maarten, has been destroyed, officials say. Four people are now known to have died on Sint Maarten, Dutch Prime Minister Mark Rutte said on Sunday, raising the death toll there from two.

France said 10 people died on its side of the island.

But he added there had been “no new damage” caused by Hurricane Jose, which skirted the islands far to the north late Saturday.

The new deaths reported on Sint Maarten bring Irma’s confirmed death toll in the Caribbean to 27. Three people were killed on Sunday in Florida in a road accident reportedly caused by the inclement weather as Irma struck the U.S. state.

French President Emmanuel Macron will leave for St. Martin late Monday to meet victims and confer with local officials, Interior Minister Gerard Collomb said. “He will be there on Tuesday morning,” Collomb said after meeting Macron at the Elysee presidential palace.

Opposition figures have accused Macron’s fledgling government of bungling the response to the disaster, with radical left leader Jean-Luc Melenchon calling for a parliamentary inquiry.

Both France and the Netherlands are rushing in logistical support, as well as hundreds of extra police to tackle looting. According to several unconfirmed reports, one or more boats from St. Martin were intercepted trying to dock near luxury stores on St. Barts, apparently with looting them in mind.

French aid includes helicopters, engineering equipment, medical supplies and a million liters of water, as the three water-treatment plants will be knocked out for months.

The French energy group EDF said it would send 140 tons of electrical equipment including generators and pumps from nearby Guadeloupe as soon as conditions permit. An emergency radio station began broadcasting practical information, news and music on St. Martin, while St. Barts’ transmitter remained out of order.

As for the Dutch side, the Dutch Red Cross described it as a “race against time to get the relief to the affected area.”

“Water pipes do not work, the stores are empty and there is no electricity in much of [Sint Maarten],” a spokesman told the Dutch news agency ANP.

The military were to evacuate Dutch tourists to Curacao, another Dutch island off of Venezuela, using two Hercules C-130 transporter planes, and the navy said it would begin large-scale distribution of food and water on Monday.

Despite Irma’s destruction, many islanders counted their blessings as Hurricane Jose, which followed on the super-storm’s heels, spared them further disaster. “I’m relieved, almost happy,” said St. Martin resident Donald Tchuisseu, a plastic glass of gin in hand after toasting Jose’s mercy with a friend. “It’s good to have a drink, laugh and think about other things,” Tchuisseu said. “The alternative is to stay home alone without power or water.”

Jose passed 135km north of St. Barts, a haven for the rich and famous formally called St. Barthelemy with a population of some 9,500. The new hurricane was 125km from St. Martin, known for its vibrant nightlife and pristine beaches.

Dutch King Willem-Alexander arrived on Sunday on the Caribbean island of Curacao with Interior Minister Ronald Plasterk to view first-hand the aid and rescue operation for nearby Sint Maarten, ANP said.

Mental health experts point to long-term emotional scars from Irma. “Not everyone will have been totally traumatized by the disaster, but a certain number of people will,” said clinical psychologist Michele Vitry in Paris. “The risk is worse when people have also lost everything—their homes, businesses, work.”