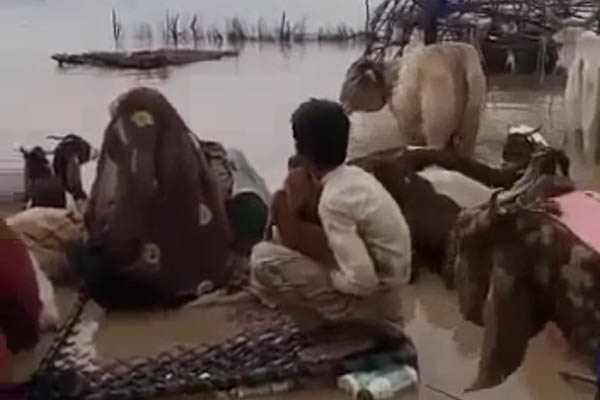 Screengrab of the flooding situation in Balochistan

The death toll linked to this year’s torrential rains across Pakistan from June 14-to date reached 618 on Sunday, with the National Disaster Management Authority (NDMA) reporting 26 new casualties in the preceding 24 hours.

According to information provided by the NDMA, Balochistan remains worst-affected by the ongoing rains, reporting 188 deaths—87 men, 45 women, and 56 children—and 75 injuries. The province reported six new deaths in the past 24 hours, all caused by flash flooding in the Killa Abdullah district of Quetta division. The NDMA said 1,275 houses were partially damaged in the province during the past 24 hours, with 400 completely destroyed. The total number of homes damaged by flooding in the province has now reached 14,660, with 5,102 completely destroyed. Locals have also reported losses of 26,929 livestock due to the flooding.

The second-worst affected province is Punjab, with 137 total deaths—16 in the past 24 hours in Dera Ghazi Khan district alone—and 277 injuries reported. According to the NDMA, 6,002 homes have been partially damaged due to heavy downpours in Pakistan’s most populous province, while 6,391 have been completely destroyed.

In Sindh, 134 people have died from June 14 till now, with 479 others injured. Data from the Provincial Disaster Management Authority shows heavy damages to infrastructure, with 26,902 houses partially damaged; 5,038 completely destroyed and 2,135km of roads damaged.

Khyber-Pakhtunkhwa has not reported any new casualties in the previous 24 hours, with its total casualties equaling 121, with 131 injured. There have been 1,092 homes completely destroyed in the province and 3,892 partially damaged. Gilgit-Baltistan has reported 8 deaths and 3 injuries; Islamabad 1 death and no injuries; and Pakistan-administered Kashmir 29 deaths and 17 injuries.

The PMD has issued advisories for fishermen from Aug. 16-18 to exercise greater caution and urged tourists to proceed with care. “All concerned authorities are advised to remain alert and to take necessary precautionary measures during the forecast period,” it added.