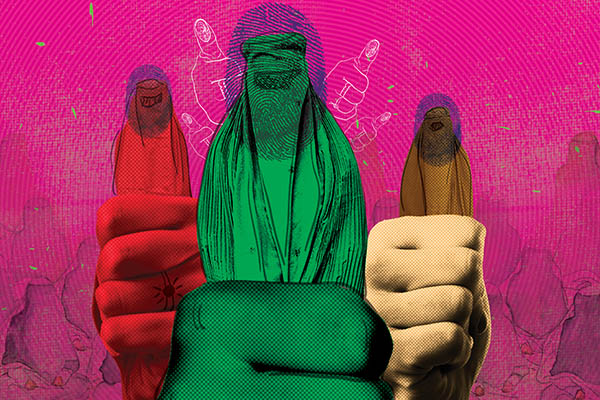 For many women in Khyber-Pakhtunkhwa’s Dir district, the 2018 general elections were a watershed moment

Farzana Azeem, a 23-year-old university student, has been waiting for this day her entire life. A resident of Khyber-Pakhtunkhwa province’s Upper Dir district, she—along with every other woman in her family—was barred from voting in Pakistan’s 2013 general elections. This year, as people across the country exercised their right to vote on July 25, she and her mother were among the thousands who broke from tradition and the politics of patriarchy to finally get a chance to have their voices be heard.

“We were barred from casting our ballots in 2013 because local community elders barred women from voting,” she tells Newsweek. “My own family was part of that agreement.” This year, however, thanks to new legislation that nullifies poll results if sufficient women do not participate, the restrictions on her were removed. “I won’t share who we voted for, but my mother and I both voted for the very first time.”

Pakistan’s northern areas, despite many progressive advances in education in recent years, remain reliant on tradition and patriarchal politics. The Upper and Lower Dir districts of Khyber-Pakhtunkhwa, especially, have been described among the most conservative regions of Pakistan. Thanks in large part to a misguided belief that “honor” and “dignity” require a woman remain in the home, large swathes of the region’s population have been barred from their right to vote by men from across the political spectrum who would mutually agree to ensure that women in their communities were restricted to their homes on polling day.

The chief beneficiary of this policy has largely been the Jamaat-e-Islami party. Led by Sirajul Haq, who belongs to Lower Dir, the party has traditionally carried all constituencies in the region. No longer. In 2018, according to official results declared by the Election Commission of Pakistan, the party was only able to secure, out of eight, one seat in the provincial assembly; it couldn’t even win one of the three seats in the National Assembly. The JI chief, contesting from his home turf, lost to a little-known candidate of Imran Khan’s Pakistan Tehreek-e-Insaf by over 17,000 votes. According to independent analysts and observers, this was largely due to the entry of women in the public sphere.

Shad Begum, a civil rights activist from Lower Dir, has been a persuasive voice for the rights of women of her home region. Talking to Newsweek, she explained that the PTI’s win from Dir was a clear sign that women wanted change—and were tired of the way they had been treated by political parties that had ruled the region in the past.

Ibad Ullah, also from Lower Dir, agrees with Begum. He said that while his family had always supported the Jamaat-e-Islami, women voters had helped the PTI win. “On polling day, Jamaat supporters avoided bringing their women to vote, trying to achieve the 10 percent minimum but no more. But when they saw the flocks of PTI women voters, they realized their mistake and tried to encourage the women to come out. By then it was too late.”

Praising the Election Act 2017, passed into law by the outgoing Pakistan Muslim League (Nawaz)-led government, Begum said making the participation of women voters mandatory was a welcome development. Section 9 of it states: “If the turnout of women voters is less than 10 percent of the total votes polled in a constituency, the [Election] Commission may presume that women voters have been restrained through an agreement from casting their votes and may declare, polling at one or more polling stations or election in the whole constituency, void.”

“It was a long journey till this point,” says Begum. In 2013, all political parties had barred the women of Dir from polling, allowing the Jamaat-e-Islami to triumph. “I joined the non-governmental Aurat Foundation in lodging a petition against barring women from polls. The Election Commission declared the poll results void, but the ruling was challenged at the Peshawar High Court,” says Begum. The High Court dismissed the petition due to the lack of evidence. “The agreement to bar women voters was made orally and the court wanted documented proof—that’s why we lost the case,” alleged Begum.

She said it had been a shock to see representatives of political parties informing the court that women had not voted due to personal reasons rather than any coercion. “These men were restricting women from casting votes and then blatantly lying about it to avoid blame,” she claims.

The 2018 polls, she says, proved them wrong. “In Lower Dir alone, 93,000 women exercised their right to vote for the first time. It was a good turnout. Political parties also mobilized women to vote,” she said. “I don’t know who each and every woman voted for, of course, but can presume the majority voted for PTI based on the results. That’s why the decades-old paradigm has shifted away from the religious parties.” Begum says terrorism and displacement had made the lives of the region’s women even more difficult and they had enacted their revenge by voting out the politicians who had done nothing to alleviate their plight.

But not every woman is in favor of the Election Act 2017. “I am against the 10 percent female mandatory vote,” says local resident and teacher Bughdada Bibi. “There are a lot of men who don’t vote either. Why are men free to decide whether or not to vote, but women are pressured into it?” she says, adding that while she was not against women voting, she would prefer reforms over forced polling. “Why should I vote for a person I don’t like? By making my representation compulsory, the state is, in another way, targeting my rights as a woman.”

But even as Dir managed to make history, other constituencies did not. Some news reports alleged that low turnout of women voters in the NA-10 (Shangla) and NA-48 (North Waziristan) constituencies had rendered the results void. ECP spokesman Altaf Khan says this is not the case. “If we see any signs of women being pressured to stay home, then we may declare those results void.” However, he added, the 10 percent clause was applicable on total votes polled and not registered votes and the reportage had mistakenly claimed otherwise.

Mohsin Javed Dawar, an independent candidate from NA-48 who won the polls, said it was ludicrous to assume any agreement had prevented women from voting in his constituency. Instead, he told Newsweek, the low turnout of women happened due to some security arrangements and polling schemes. “No vehicle was allowed to enter within one kilometer of the polling station, forcing women to walk that distance,” he said, adding that residents of North Waziristan were also unable to check their polling stations through mobile apps, leaving them confused about where to register their vote. “Some polling stations didn’t even have women staff to assist female voters,” many of who were voting for the first time and needed help.

Rights activist Shad Begum says it is unfortunate that despite all the gains women have made in Pakistan, the men around them still largely see them as tools—to be used and discarded as needed. Before the Election Act 2017 came into force, she says, the men would prevent women from voting in the name of “custom,” “honor,” and “religion.” After it became a requirement to have women voters, many men were haranguing women into voting. In some constituencies, the lines of women were so long, polling continued until 11:00 p.m.—five hours after the polls were officially set to close. “I asked those men where they were when women were barred from voting. But they didn’t care. They only give importance to women when it benefits them. Our rights are dependent how much they can gain from us.”

The women of Dir, by exercising their right to vote, have taken one small step toward breaking these shackles. Now they, and the men they have voted into power, must ensure that no one is ever allowed to steal their political franchise ever again.