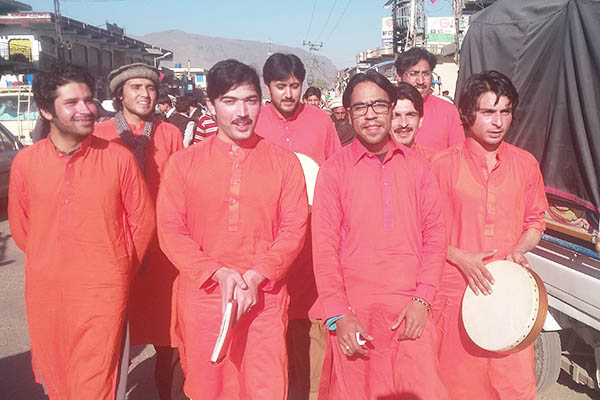 A group of young men and women are hoping to use Sufism to eradicate extremism from Swat.

Seven years ago, Pakistan’s military swept into Swat, freeing it of the Taliban who had virtually ruled the northwestern district between 2007 and 2009. While the once restive region’s infrastructure has slowly recovered from the years of militant excess—the military has deemed the region largely safe for travel and tourism is once again on the rise—the rightwing ideology that took root during those years has proven harder to shake. A group of 18 young men and women hope to change this through one of the oldest traditions available to them—Sufi music.

Swat has a long history of Sufism, a moderate branch of Islam that draws inspiration from spirituality rather than doctrine, and Pakistan’s northwest is home to dozens of shrines dedicated to Sufi saints. “I believe Sufism is the means to touch people’s souls and divert their minds from extremism toward normalcy,” says the movement’s 32-year-old founder Khan, who only goes by one name. The classically trained musician teaches music in Mingora, the hometown of Malala Yousafzai, the world’s youngest Nobel laureate. He says he decided to form his ‘Sufi Group’ to help promote peace in the region and remind local residents of the beauty all around them. “Mostly we sing the poetry of Rahman Baba with a message of patriotism and peace,” he says. “We want to bring back the same old peaceful environment in the region.”

The 18 participants—15 men and three women—go door-to-door in orange shalwar kameez, the bright colors representing vigor and rebirth. Due to regional sensibilities, the men perform on streets while the women appeal directly to local residents at special, segregated events. “Generally people don’t wear very bright colors in Swat so we have had to explain why we’re so dressed up,” says 19-year-old Obaidullah Arman, who plays the ‘Daf’, a frame-like drum.

“It [Daf] is familiar to people across the region, regardless of liberal or conservative thought,” says Arman, adding that a hadith states that residents of Madina played the daf to celebrate Islam’s Prophet reaching the ancient city 1,400 years ago. 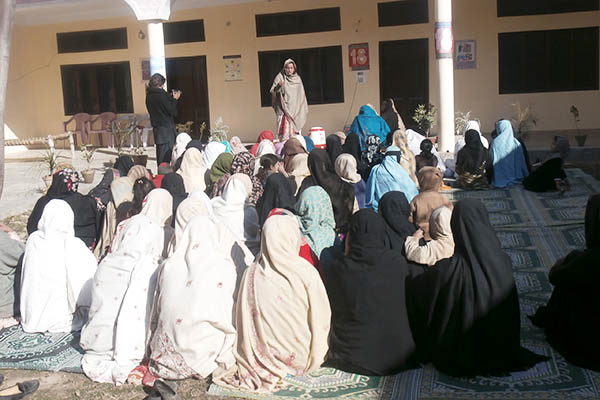 “Nobody talks about the militancy or the destructive flood that followed,” says 27-year-old Amna, one of three women leading the charge in the music group. “We’re trying to encourage discourse by organizing open mic nights where anyone can come and express themselves,” she told Newsweek. “Women are showing great interest and our participation has been steadily growing.” Around 800 women have attended various sessions since they started the initiative last year, she says.

At a recent open mic event, says Amna, participants recited poetry, sang Sufi ghazals and traditional wedding songs, and even repeated jokes they had heard. “Our primary goal is for the open mic sessions to provide an environment where women feel free to speak their mind and can get past the trauma they have suffered over the past decade.”

Amna, draped in a purple shawl that she says represents feminism, sings and plays the daf at the open mic sessions and hopes to lead by example. “Old or young, everyone is welcome at our events,” she says, adding that even elderly women have been participating.

Neelum Raheem, an anthropologist who joined the musicians to advocate women’s rights, says militancy has severely curtailed the movement of women in Swat. “Women in Swat are confined within walls,” she says, adding that the open mic nights are helping revive local culture. “When women gather in one place, they share their issues and gain strength from one another,” she says. “This can help eliminate frustration.”

“This is a great initiative and we all really appreciate it,” said one of the participants of a recent open mic night. “We are all united under one roof, which helps us find new friends among like-minded people.”

Despite the growing popularity of the musicians, Khan’s efforts have been criticized by some quarters. The participants say local residents were initially hostile and some even declared them apostates. “Some of them criticized the color of our clothes, saying it represents Indian culture and should not be practiced in Pakistan. There were even some claiming we were trying to introduce a new sect of Islam to Swat,” says Khan. While most of these criticisms have been resolved through dialogue, says Khan, there is still some blowback.

Usman Olasyar, the executive director of the Swastu Art and Culture Association, says Sufism is not the way forward. “No doubt Sufism has played a positive regional role in developing the fields of literature, music and religious harmony,” he says. “But every age has its own issues to tackle with. We need to adopt a better approach, focused on identifying and clarifying our priorities, to guide the new generation with fresh vision,” he added.

Critics also say that following the military operation, Swat is relatively peaceful and does not require any kind of ‘soft’ intervention. The Sufi musicians counter that while the terror of 2007-2009 might be gone, its aftermath—as evidenced by target killings and sporadic bouts of unrest—still lingers. Either way, they say, the number of people who support them far outnumber the ones who chastise their efforts. “I am not doing anything wrong. I am hopeful my mission will continue until we have succeeded in our goal of peace,” says Khan.

I personally have view regarding Sufism or any other branch or sect of religion. The case of Mumtaz Qadri deleted this myth from minds and once a recognized islamic school of thought prevailed in sub continent. I think Mumtaz Qadri a terrorist and killer who killed salman Taseer an innocent person and then Governor Punjab province of Pakistan. Now sufism has no remedy to treat the corrupted and virus infested minds of terrorists or their supporters. We need to enter into an era of science, technology and logic. Poems of poets may play little role but will not play as much is needed. Education is remedy and full focus is needed over it. It can play role and eradicate terrorism and fundamentalism. As for as Sufism is concerned it has also turned to fundamental and radical Islam which can not solve our issues.

Our youth understands the issues Pakistan is facing right now and that the most important thing. Every step, each person takes, is a step towards a better Pakistan. This step by the youth may, or may not, work for the local community but this is definitely food for thought. The biggest problem with extremism is illiteracy. Singing songs of sufis will, hopefully, release people’s frustration and sense of void, then hopefully extremism will not be only way of releasing stress
Good work kidos, your critica will some day improve means of spreading love and tolerance