by AFP and Newsweek Pakistan February 4, 2014 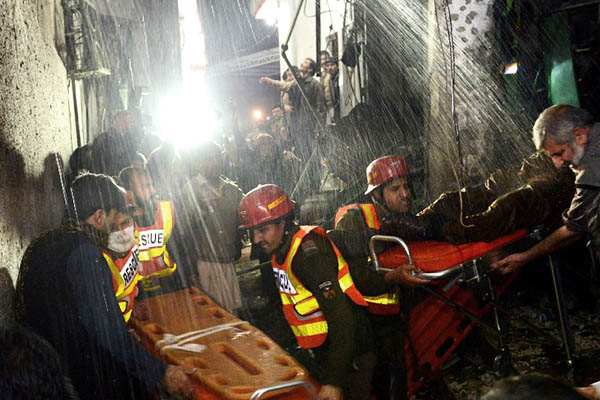 At least eight killed, over 20 injured in bombing at the Kocha-e-Risaldar area of Khyber-Pakhtunkhwa capital.

At least eight people were killed and 26 injured after a suicide bomb detonated outside a hotel in the Kocha-e-Risaldar area of Peshawar on Tuesday night.

“The blast occurred in the Shia-dominated neighborhood of Qissa Khawani Bazaar,” said senior police official Faisal Mukhtar. “We are examining the nature of the blast and it appears to be a suicide attack.” Shafqat Malik, who leads the Bomb Disposal Unit, confirmed it was a suicide attack.

Shortly after the explosion, law enforcement officials cordoned off the area and transferred all injured to the nearby Lady Reading Hospital. A spokesman for the hospital confirmed the death toll. “We received eight bodies and over 20 injured,” he told journalists. No group has claimed responsibility for the blast yet.

Earlier, a prominent Shia leader was gunned down in Qissa Khwani Bazaar. Haji Sardar Ali, the head of the Tehrik-e-Nafaz-e-Fiqah-e-Jafaria, a Shia rights movement, was gunned down while walking to his shop. Around a hundred Shia Muslims gathered outside the Lady Reading Hospital, where Ali’s body was taken, and chanted slogans demanding the arrest of the attackers. No group has yet claimed responsibility for the killing.

The Pakistani Taliban have denied any involvement in the blast. “We dissociate ourselves from any bombings that occurred in Peshawar in the past two days,” Tehreek-e-Taliban Pakistan central spokesman Shahidullah Shahid said in an emailed statement. Shahid also claimed that the Jundallah group had no affiliation with the TTP. “Ahmadullah Marwat, who claims responsibility for such blasts on behalf of Jundallah, has no clear link to any mujahideen [of the TTP],” he added.

However, a few hours after Shahid’s statement, Mufti Hassan Swati, the alleged head of the TTP’s Peshawar wing, claimed the attack. Asked why they attacked while talks were going on, Swati said: “The peace talks are under way but there is no ceasefire. We will continue attacks until a ceasefire is announced.”

Whilst the arrangement for so called peace talks are being made and all and sundry are pleading with US (as if they will take any notice), the terrorists are having a field day killing innocent men women and children and than denying any responsibility, inspite of their footprints all over the scene of crime.Now what has that loony imran got to say ?put a microphone infront of him and he will sing and dance in defense of his brothers the talibans-such is the intelligence level of the head of PTI and his supporters.Stop the drones and we carry on killing!Those elected who are responsible for the protection, law and order should, if they had any sense and feeling of shame ,should resign,. but they have none and will never have any,They are as guilty as the cursed terrorists.