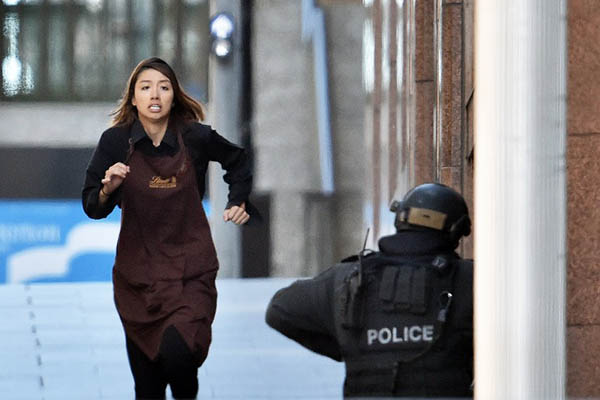 Hostage-taker is has also demanded that he be allowed to speak directly to Australian prime minister.

A man holding hostages in a Sydney cafe on Monday has demanded that a flag of the Islamic State group be delivered to him and warned that four bombs have been planted around the city, a report said.

A major square in the heart of the Australian city is in lockdown with hundreds of armed police surrounding the Lindt chocolate café, where a flag—black with white Arabic writing—was held to a window by customers. It appears to be the shahada, or profession of faith in Islam, and says: “There is no god but Allah; Mohammed [PBUH] is the Messenger of Allah.”

Channel Ten said it had spoken to two of the hostages inside the cafe and the man holding them had made a series of demands. “Our #TenNews team have spoken directly to 2 hostages inside the café. They are confirming 2 demands from the perpetrator,” the network tweeted. “He needs the ISIL flag to be directly delivered to the cafe; And his 2nd request is to speak to the Prime Minster. They also state there are 4 bombs two inside the Lindt café at Martin Place – and two further in the Sydney CBD.”

There was no confirmation from police.

Five people have so far fled the cafe, three men some six hours into the siege and two women about an hour later.

Australia has been on high alert after the government raised concerns that citizens who have fought alongside jihadists in Iraq and Syria could return home radicalized and capable of carrying out attacks. The government in September raised its terror threat level and police conducted large-scale counter-terror raids across the country.