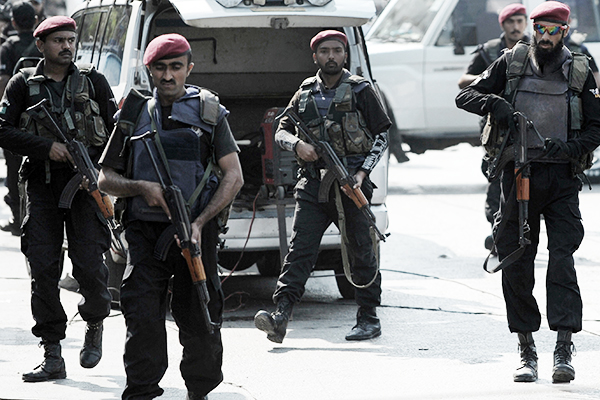 The Taliban launched two separate attacks on security checkpoints in Pakistan on Wednesday, killing at least two security personnel and wounding seven others.

In the first attack, a suicide bomber rammed his explosives-filled car into a checkpoint as militants armed with guns stormed a nearby building in Shawa, North Waziristan, killing two personnel, officials said. The post is run jointly by the paramilitary Frontier Corps and tribal police, and the adjacent building houses more than 40 security forces.

“At least two security personnel have embraced martyrdom and seven were wounded in the suicide attack,” said a security official in Peshawar. “Firing inside the building has stopped, but the building was damaged due to the intensity of the blast.”

The injured have been flown to nearby military hospitals.

Abu Baseer, a purported spokesman of little-known Taliban faction Ansar ul Mujahideen, claimed responsibility for the attack. Speaking from an undisclosed location, he said the attack was in revenge for the death of Pakistani Taliban leader Hakimullah Mehsud, who was killed in a U.S. drone strike on Nov. 1.

In a second attack in Swabi, some 50 kilometers northwest of Islamabad, around a dozen militants launched an attack at a police checkpoint before dawn on Wednesday, police said. “The attack was successfully thwarted and four militants were killed in the retaliatory fire by police,” said Sajjad Khan, the district police chief.