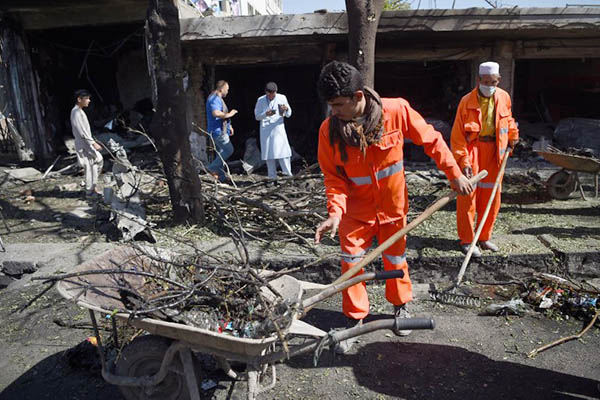 At least 24 killed, 42 others wounded in assault targeting bus full of government employees

At least 24 people have been killed and 42 wounded after a Taliban car bomb struck a bus carrying government employees in western Kabul on Monday, officials said, the latest attack to strike the Afghan capital.

“The car bomb hit a bus carrying employees of the ministry of mines during rush hour,” interior ministry spokesman Najib Danish told AFP. The Taliban claimed responsibility for the blast that hit a busy neighborhood of the Afghan capital just before 7 a.m.

The bombing comes as the resurgent militant group has stepped up attacks across the country in recent days, with several new districts falling to the Taliban over the weekend. The blast hit an area of the capital that is home to many Shia Hazaras, a persecuted ethnic minority who have been targeted many times in the past. It is also near the home of prominent politician and former warlord Mohammad Mohaqeq.

Omid Maisom Mohaqiq, a spokesman for the politician, said the bomb had detonated near the first checkpoint approaching the house, “killing and wounding some civilians.” An AFP photographer at the scene saw multiple bodies and wounded people in the street, surrounded by shattered glass as security forces cordoned off the area.

The charred remains of the bus stood in the middle of the road and a black column of smoke from the explosion hung in the air.

An army truck and forklifts were attempting to remove the carcass of the bus as ambulances as well as taxis and private cars ferried the injured to nearby hospitals, an AFP photographer said.

Kabul’s Hazara community were due on Monday to mark the one-year anniversary of an attack in the heart of the capital that killed 84 and wounded more than 300 people, mostly members of the ethnic minority. That attack was the first in Afghanistan claimed by the Islamic State group, which has since carried out multiple attacks targeting the country’s Shia minority.

The Hazara community were due to hold a demonstration to mark the July 23, 2016 tragedy, but had agreed to postpone the march after meeting with President Ashraf Ghani on Sunday.

Kabul is regularly rocked by suicide bombs and attacks. A recent U.N. report showed that attacks on the capital accounted for nearly one-fifth of all civilian Afghan casualties in the first half of 2017. The U.N. Assistance Mission in Afghanistan (UNAMA), which has been documenting civilian casualties since 2009, said in its recent report that 1,662 civilians were killed and more than 3,500 injured in the first six months of the year.

Many died in a single devastating attack in Kabul in late May when a truck bomb exploded, also during the morning rush hour, killing more than 150 people and injuring hundreds. UNAMA put the civilian death toll at 92, saying it was the deadliest incident to hit the country since 2001.

The bloody toll for the first six months of 2017 has unsettled the government and put increasing pressure on President Ghani. Protests and deadly street clashes hit the Afghan capital in the wake of the May attack as people incensed by security failures called for his government’s resignation.

The UNAMA report also said that nearly half of Afghanistan’s 34 provinces have seen an increase in civilian deaths in the first six months of the year, mainly due to the rise in attacks by anti-government forces across the country. NATO’s combat mission in Afghanistan ended three years ago, handing sole responsibility to the country’s security forces, which have also suffered spiraling casualties as they try to beat back the resurgent Taliban and contain the growing threat from the Islamic State group.