The Afghan Woman Fighting Sexism in a Man’s World 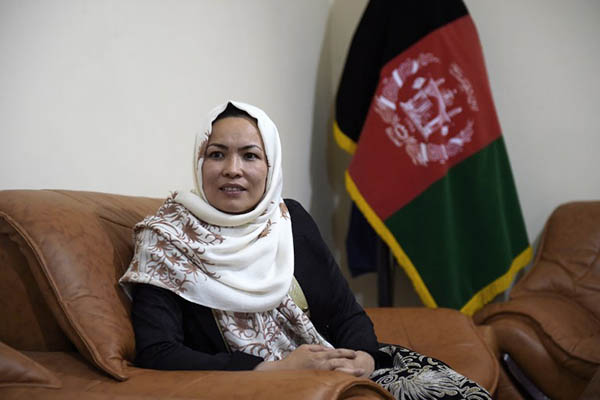 Masooma Muradi, the war-torn country’s only woman governor, is fighting against calls for her ouster from religious conservatives and opponents.

Surrounded by male advisers and condescending “mansplainers,” Masooma Muradi holds her own against a deep well of sexism in a society unaccustomed to women exercising authority.

Breaking new ground as Afghanistan’s only female governor, Muradi’s ascent to the top post in remote Daikundi province is a remarkable feat in Afghanistan, where stubborn patriarchal traditions are at odds with progressive ideas about a woman’s place in the world. But barely a year after President Ashraf Ghani appointed Muradi, her job hangs by a thread, with growing calls for her ouster from religious conservatives and opponents.

It highlights the travails of being the only woman in an overwhelmingly male preserve.

“People claim to be open-minded but many cannot bear having a woman in this position,” Muradi, 37, told AFP, sinking into an overstuffed sofa in her office in the capital Nili, decorated with faux sunflowers and a large portrait of a pouting child. “I won’t allow men to hush me up—society is not used to that from a woman,” she added.

Barely five feet tall, Muradi’s diminutive frame and soft demeanor belies her steely instinct for survival. The mother-of-two was handpicked by Ghani in Kabul to lead Daikundi, a mosaic of rolling hills and boulder-strewn ridges in central Afghanistan, hemmed in by insurgency-wracked provinces.

But protests erupted even before she arrived in Daikundi, with political opponents—almost all men—pillorying her lack of governance experience.

Muradi has since managed to hold on to the job, but the resentment was palpable when she recently stepped out in Nili with AFP, trailed by Kalashnikov-toting guards. “Useless,” one man barked as she passed by. “Maybe she should be a governor just for women,” another growled.

Women have made giant strides since the Taliban regime was ousted in 2001, but they are still so absent from public life that the social media hashtag #WhereAreTheWomen has gained traction in Afghanistan.

“The attitudes throughout Afghanistan still are such that not everyone is ready to be governed by a woman,” said Douglas Keh, Afghanistan country director at the United Nations Development Program. “Women leaders need all the support they can get,” he added.

Daikundi’s administration has long been a boys’ club, which was apparent at a recent provincial council meeting, attended by more than a dozen men but just one woman. Swaddled in a blue scarf, she sat at the edge of the room doodling on the sofa upholstery using her finger as an imaginary pen.

When she tried to talk, the man chairing the meeting stuck his palm up to make her stop. Only when a woman UNDP official attending the meeting asked for her view, was she able to speak. “I recently replaced a man in the provincial council,” she began.

A council member interjected with a smirk. “Say something about men’s problems too,” he said, setting off a ripple of titters. “We really are worried about men’s rights.”

“Paying lip service to women’s empowerment is one thing but real empowerment comes with deference to a woman leader’s authority,” the UNDP official later said, referring to Muradi’s struggles.

Muradi, who holds a degree in business administration but lacks political clout, stands in strong contrast to warlords and strongmen who govern other provinces amid a deep-rooted system of patronage politics. The antipathy towards her, observers say, highlights not just sexism but also clashing political interests.

Daikundi is among the most challenging of Afghanistan’s 34 provinces to govern. Cut off from the outside world by heavy snow for several months of the year, its meager almond harvests, mainstay of the local economy, are dependent on the brutal vagaries of weather.

Rampant joblessness is a ticking time bomb and most development plans are just on paper. “There are schools but most don’t have buildings, there are hospitals but many don’t have doctors,” said Haji Rasouli, a grocery seller in Nili. “I support women’s empowerment but will having a woman governor solve all these problems?”

For his part, Ghani has appointed four female ministers since he came to power in 2014, risking political capital. Last year, for the first time in Afghanistan’s history he nominated a woman to the Supreme Court, but when she was rejected by parliament he appointed a man instead.

He also dismissed the only other woman governor, of central Ghor province, after protests from religious conservatives. “To genuinely give women a role in governance, Ghani needs to push forward when he encounters opposition,” said Heather Barr, a women’s rights researcher at Human Rights Watch. “This hasn’t been happening.”

There are fears that Muradi might meet the same fate. But she can count on the unbridled support of at least one person—her husband.

Late one evening, after Muradi returned home, Khalil Hashem walked into the room and said something you would seldom hear an Afghan husband, traditionally blind to domestic details, say to his wife: “Dinner has been served.”

But he has also been at the receiving end of sexist wisecracks. “People call me her secretary, her babysitter,” he said. “But I am very proud of her.”