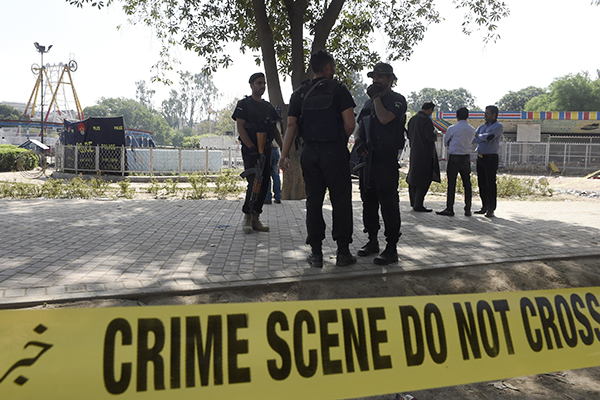 Debating policing and counterterrorism after the Lahore attack.

Operationally speaking, the plan was sound. The park in Lahore’s Gulshan-e-Iqbal was filled with families—many of them Christian, celebrating Easter Sunday. The executors had selected the time and day carefully. The result was predictable: high casualties, mayhem, stressed rescue teams, emotionally distraught people running helter-skelter looking for their loved ones, TV crews rushing to the spot, and roads jammed with traffic snarls, making rescue even more difficult.

A holiday turned into grave tragedy. A spectacle was created, and the bomber and his handlers’ mission stood accomplished.

Expectedly also, even as government functionaries worked on the ground, the cacophony began on television screens. Talking heads with no expertise in counterterrorism, rescue or administering a city, whose population continues to burgeon, began blasting the government.

The usual talk began about whether terror groups have been effectively neutralized, about sloppy rescue efforts (ignoring the challenge such high casualty counts pose to even the most efficient of systems), about the multiple gates and inadequate security at the park without realizing what it means (even if there are functioning walkthrough gates and scanners) to monitor the entry and exit of hundreds of people, to our societal approach to strict security checks or even to the fact that the bomber didn’t need to enter the park to wreak havoc.

A recent seminar in Bahawalpur looked at almost every aspect of policing and counterterrorism. The refrain from most speakers, as also questions from the audience, was about the police’s lack of capacity. Comparison was constantly made between the efficiency displayed by the Army and the sloppiness that’s become the metaphor for the police.

I decided to upend the proposition about police efficiency and asked the audience how the police would fare if our society remained the same but if we somehow managed to import MI5 and the London Met Police. My point was simple: the functioning and the domains of the Army and the police are totally different. The comparison, therefore, is analytically flawed at best and odious at worst. Secondly, to expect the police, which constantly interfaces with society, to work efficiently without analyzing societal attitudes is to be analytically sloppy again.

This is not to say that the police can’t or should not improve. For instance, it should act less as a constabulary tasked to maintain “law and order” and move toward providing public safety and security. Even so, there’s an interactive dynamic here and societal attitudes to accepting laws and rules constitute a major factor in shaping the kind of police we want. This is true of other law enforcement forces also, especially those that interface with the people.

A similar conclusion can be drawn with reference to effective counterterrorism by referring to societal attitudes. France and Belgium have been rocked with terror attacks in the past two years. While a couple of attacks did get preempted, most went through. These are societies where terror groups and their sleeper cells are socially and ideologically isolated. In other words, the predominant majority of the populations of those countries, including Muslims, do not subscribe to the nihilism of those groups.

From a counterterrorism perspective, it’s a much easier landscape. The police and other law enforcement agencies have an elusive but clear and isolated target—at least up until now. There’s no problem of extremism in society. The numbers of the radicalized are low. The populations are easier to manage, the economies are stronger, the systems are more functional, and the citizens conditioned, for the most part, to abide by the laws not just through enforcement but normatively.

Most of those conditions do not exist here. The population is large and growing; there’s illiteracy; systems are stressed, often to breaking point; the numbers of the radicalized and the extremists are very high; the police forces are antiquated, demoralized, underpaid, lacking training, equipment and effective commands; the society is divisive; the economy is feeble; political stability is grounded in tenuous compromises, etc.

Both for effective policing and counterterrorism, we must appreciate the situation rather than situating our appreciation. That requires looking not just at performance but also at the system(s) in which the police forces and other organizations operate. The problem is multifold. It cannot be analyzed through a singular factor, i.e., capacity.

Once we look into how the system operates—or doesn’t—and then take count of how many attacks have been preempted and thwarted versus how many have gone through, the balance sheet won’t look as bad for law enforcement agencies as we make it out to be and often without any reference to data. The problem with preemptions is that they don’t make headlines news. When an attack doesn’t happen, there’s no story; when it does, the story becomes the only point of reference.

As Nassim Nicholas Taleb wrote in The Black Swan, speaking of outliers, if someone had taken measures and prevented 9/11 from happening, he wouldn’t have got any statues. In fact, chances are, because the terrorists couldn’t have used the cockpits, measures such as bulletproof doors and locks would have got the public to boot him out of office for squandering resources—“He will retire depressed, with a great sense of failure.”

This, then, is the problem. Nothing happens when nothing happens. All hell breaks loose when something does happen. Everyone would demand bulletproof doors and locks post-9/11, and yet, if they were there and prevented 9/11 from happening, there would have been no appreciation. Yossarian loves this logic.

As for the capacity of the terrorists, take a look at the choice of targets in the last year and a half. Most are soft targets, including the attack on a PAF residential colony at Badaber. That shows their capacity to take on hard targets has been largely degraded. So they choose soft targets—easy to penetrate, almost impossible to fully guard—to try and retain their asymmetric advantage. Attacks on such targets create a huge emotional and psychological backlash for the state.

This is not an easy conflict. It’s not easy anywhere, even in Europe. It will take a very long time, if at all, for us and the world to get out of it. And it will require a deft mix of kinetic and non-kinetic strategies to get there.

Haider is editor of national-security affairs at Capital TV.

A thoughtful look at the challenges faced. Perhaps it is time to move several gears up and to start taking pre-emptive action against those who potentially pose a threat to innocent lives.