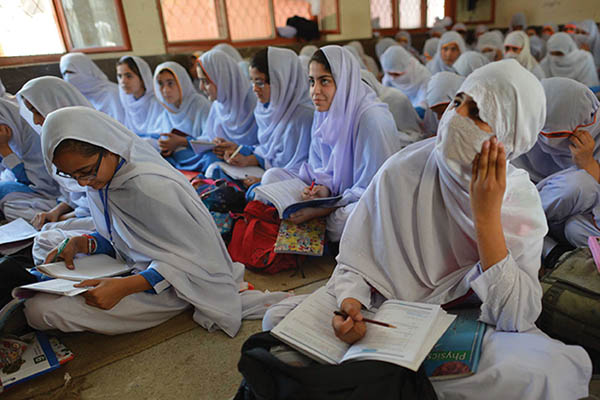 A uniform syllabus, as proposed by the incumbent government, risks setting back Pakistan’s sciences

In every age, there was a language of knowledge. We know that Arabic was the purveyor of science and inquiry in the 12th century when Ibn Rushd gave Europe its Renaissance by introducing it to Aristotle.

Richard Eaten, in his book India in the Persianate Age writes: “In Mongol-dominated China, Persian served not only as a lingua franca but as the official foreign language. The Venetian merchant-traveler Marco Polo (d. 1324) mainly used Persian in China, as he did, in fact, throughout his travels on the Silk Road; so did his near-contemporary and even greater globetrotter Ibn Battuta (d. 1377), who traveled many of the same pan-Asian circuits 13th-century Asia.”

Today, English is the language of knowledge. In Pakistan, however, there is a move to get rid of it after branding it a vehicle of intellectual slavery. Pakistan is waiting for a decisive “reform” of education in light of the past statements of Prime Minister Imran Khan. He has been sarcastic about “American puppets” when referring to Pakistan as an ally of the Americans against the Taliban. Will the assault of his reform be on English and the so-called expensive English-medium schools where the Pakistani middle class sends its children while lamenting their high fees?

The basis of all kinds of nationalism relies on linguistic prejudice aided by educational theories based on “mother tongue” as vehicle of effective learning. Urdu dominates Pakistan ironically without being the mother tongue of any province. English is there as a remnant of the British Raj, whose words come in handy when we wish to avoid the social blots contained in our own language.

But the real problem is that you can’t learn the sciences in Urdu and have to wait till you shift to English in college. The sciences simply can’t be learned in Urdu because you don’t have the alternative vocabulary—unless you can handle the tongue-twister Arabic words the textbooks contain. English is unavoidable because of its ability to carry the latest research in the subjects being studied. Even in the arts, unless you are abreast of the latest research in the West, you cannot get very far professionally.

Dr. Pervez Hoodbhoy was teaching physics and math at Lahore’s Forman Christian University until he was given a notice of dismissal that ignored his international status as a scientist. (He visits Princeton University in the U.S. on teaching assignments but he is controversial in Pakistan because of his scientific objections to ideology.) Ironically, the governor of Punjab announced the same day that the holy Quran would be made a compulsory subject in the universities of the province. As it is, Pakistan’s technology-related institutions such as Lahore’s Engineering University often teach more religion than technology.

Internationally, the job market prefers Indians to Pakistanis because of their better grasp of English. Towards the end of the British Raj, Hindus were more inclined to learn English than the “offended” Muslims. Today, British publishers have moved to “less expensive” India to get their MSS edited by young Indians, something you can’t do in Pakistan after the experience of The Oxford University Press. Because Indians of all linguistic regions talk to each other in English the language has taken post-Raj roots and India has become a globally articulate country. Great fiction in English has been produced by Indian writers; meanwhile Salman Rushdie can’t even visit Pakistan.

In India, English-medium education is widespread and can’t be tampered with. Times of India wrote on May 29, 2008: “In India, English is the medium of instruction in good private schools and other institutions of higher education. English-medium schools often find favor with parents, especially in urban areas, due to the international status of English, its use in Indian business and most Indian universities. According to government figures, enrolment in English-medium schools (upper primary) is at an all-time high, having increased a sharp 74 percent in just three years—during 2003-2006.The most dramatic increases are in the southern states. Two Hindi-speaking states (Punjab and Himachal Pradesh) show significant increases in enrolment in English medium schools.”

As Imran Khan prepares to attack the high-fee English-medium schools with his “uniform” syllabus, he may find that Pakistan lags behind India in technology. He may approve of the Engineering University in Lahore where they teach more Islam—once through Hafiz Saeed of Lashkar-e-Taiba—than technology. Already Pakistan has tried English-language TV channels and has failed because there are no viewers—and therefore no ads—while India is running multiple such channels successfully. The fact that the “official text” of the Constitution remains in English gets lawyers in trouble because of their small-city background. Above all ideology wins when untrammeled by an intrusive logical-sequential discourse that English insists upon.

Used to the history of education as charity through the madrassa, Pakistanis mind the “commercial” basis of the English-medium education. Middle class parents trying to escape Urdu-medium schools—where English is compulsory only after class five—complain about the high fees charged by the English-medium schools, unconsciously comparing them to cheap, state-run schools. The result is that the courts are challenging the high fees charged in the private sector education without going into the phenomenon of high-quality teachers employed by them at high salaries.

The non-logical, non-sequential discourse of the ideology of Pakistan has always threatened modern education but now as Prime Minister Khan undertakes his “uniform” reform, the target most likely would be the English-medium education. He has made fun of the “bad” Urdu spoken by his rival PPP leader Bilawal Bhutto and may take it out on the business of running English-medium schools. The most obvious target of this exercise is going to be the learning of the sciences and transfer of technology in Pakistan where it stands in stark contrast to India.