The ‘Lack of Evidence’ Game 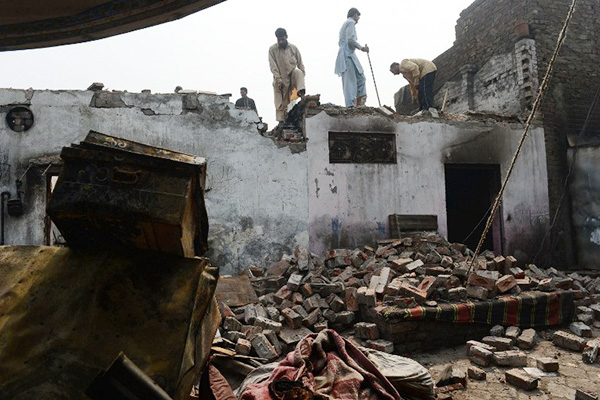 The failure of Pakistan’s judiciary.

We know that Hafiz Saeed and his Jamaat-ud-Dawa have been repeatedly let off by our judiciary due to lack of evidence about their terrorist adventures abroad. The same sort of lack of evidence has been pleaded by Lahore’s Anti-Terrorism Court, which acquitted 115 people charged with torching over 100 houses belonging to Christians in the city’s Joseph Colony in 2013. The excuse cited by the enraged mob for its atrocities was the alleged blasphemy of a Christian resident, Savan Masih.

Pakistan’s founder Mohammed Ali Jinnah couldn’t have dreamed that one day the country would take to illegal entrapments through a seriously flawed Blasphemy Law that has failed to preempt vigilante action in the name of religion. As he read the Aug. 11, 1947 speech at the Constituent Assembly in Karachi, he was aware that Christians, concentrated mostly in Punjab, had taken a collective decision to support the Pakistan Movement and not move to India at Partition. Jinnah also couldn’t have imagined that one day Pakistan would impose separate electorates on the Christians to take them out of the political mainstream. He wouldn’t have allowed the quiet trend among Christians to gradually quit the armed forces and the police, where they traditionally served with distinction.

Now in the year 2017, the mob that destroyed a Christian colony has not even been symbolically punished. Far away in America Christians are out in the streets against President Donald Trump, protesting his entry-ban on Muslim refugees. Rafia Zakaria writing in Dawn on Tuesday has asked a very important question of Muslims:

“It would be impossible to imagine a similar number of Pakistanis standing at airports or border posts to welcome Christian refugees or even Afghan refugees. The dissonance between what Muslims expect from the U.S. and what they are willing to do in their own countries deserves immediate and urgent attention.”