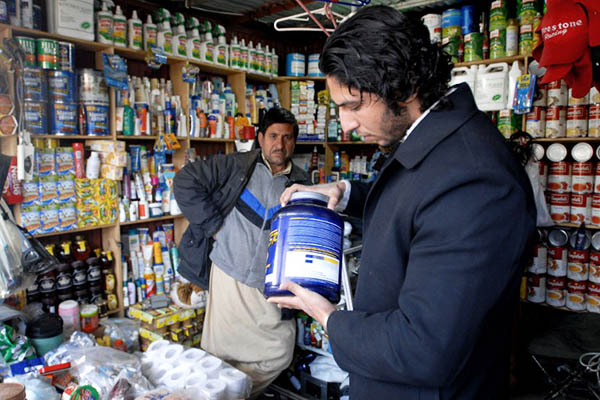 Kabul shopkeeper Haji Najimullah is furious with the Americans. Not for their long military intervention in Afghanistan, but the fact they are leaving, robbing his market stall of an important supplier.

Hundreds of stallholders in Kabul’s “Bush bazaar” have made a tidy living selling off “surplus” equipment and rations—much of it pilfered—from the U.S.-led NATO mission in Afghanistan. But business has dwindled to half what it was a few years ago at the market, named after U.S. president George W. Bush who ordered the invasion of Afghanistan after the 9/11 attacks of 2001.

Traders are hoping that the election on Saturday to choose a successor to President Hamid Karzai will bring stability to the country and boost their fortunes. In the short-term, though, Najimullah admits his biggest worry is the withdrawal of U.S.-led forces.

“Americans are the worst kind of people I have ever seen, they are leaving but they have stopped giving away the things they don’t need to Afghans—instead they burn them,” he raged, standing in his shop piled high with camouflage gear, military boots and combat knives. “The Soviets were better—when they left they also left everything behind for Afghans to use.”

Fear of abandonment extends beyond the traders at Bush bazaar—the U.S.-led mission has pumped billions of dollars into the Afghan economy and there are concerns of a dramatic financial crash when foreign forces leave. Some Afghans predict a lack of jobs for the fast-growing population could become as big a threat to the country as the militants in the future, and generating economy activity will be one of the major challenges awaiting the new president.

A few years ago, shoppers at Bush bazaar could get their hands on all sorts of contraband. Illicit pork and alcohol—forbidden in Islamic Afghanistan, along with sensitive military equipment such as sniper sights and night-vision goggles were all to be found in the narrow lanes during the market’s heyday.

It was the only place to buy packets of ready-made omelets, jumbo-size bottles of American sauces and tins of Quaker Oats—all often “sourced” from the giant U.S. military base at Bagram.

U.S. and Afghan fatigues were also on sale, causing grave concern as Taliban insurgents often disguise themselves as soldiers to access bases before launching attacks. Now the stalls mostly stock clothing, boots and so-called “MRE”—“meal ready-to-eat”—ration packs from NATO forces, alongside the cheap Chinese goods available at most of the city’s markets.

The once-bustling lanes are quiet, which shopkeeper Mostafa blames on the uncertainty that has dogged 2014, a year which sees both the end of NATO’s combat mission and the election to choose a new national leader. “People were afraid of 2014, and now that the year has begun nothing much has changed, the only remaining concern for them is the election, and once the election passes I hope things will get better,” said the 28-year-old. “I think it is because of the elections that our business is down, so we hope once the things are settled our business will grow again.”

The market was traditionally popular with Kabul’s large community of foreign aid workers, journalists and contractors on the look-out for cheap kit and familiar provisions. But the run-up to the election has seen a series of deadly attacks in Kabul targeting foreigners, including an assault on the Serena hotel last month and the daylight shooting of a Swedish journalist.

The increased threat to foreigners has prompted many international organizations in Kabul to tighten their security rules and stop staff visiting markets and other public places.

Whatever the challenges, Kabul’s wheeler-dealer traders are a resilient bunch—before Bush bazaar there was Brezhnev bazaar, selling Soviet gear, named after leader Leonid Brezhnev whose rule saw the invasion of 1979.

Haji Tor Mohseni, the 62-year-old head of Bush bazaar, insisted the 300-stall market would survive the NATO withdrawal. “We will keep this market open even if all the foreigners leave—our own traders will import similar goods, though the prices might be a bit higher,” he said. “We hope things get better after the election, so that we continue our business well, we are hopeful that things will get better.”