The Mullahs Helping Women in Afghanistan 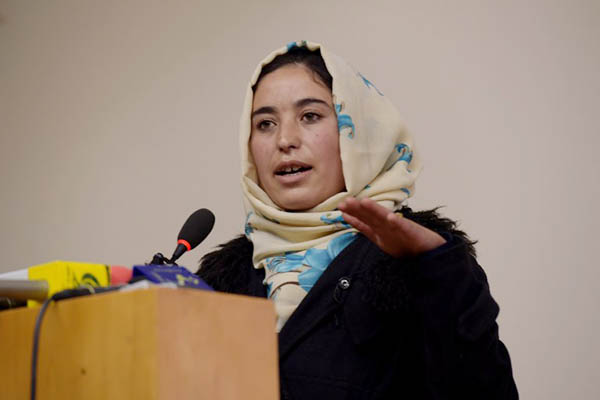 Masooma Hasani would be pelted with rocks whenever she went skiing, a sport considered unbecoming for girls in conservative Afghan society, but an unlikely ally helped change local attitudes: mullahs advocating women’s rights.

Skidding down the snow-blanketed slopes of Bamiyan, in central Afghanistan, 18-year-old Hasani for years suffered hostility and abuse from passing men unaccustomed to unveiled women dressed in figure-hugging ski suits. “‘Girls don’t have the right to do sports. Girls are born to learn household chores such as cooking and cleaning.’ That’s what people would say,” Hasani told a rapt audience during a Kabul University event on Wednesday marking Human Rights Day. “People would beat up my brothers and say our family was shameless to allow girls to ski. It made me cry.”

Hasani, diminutive but feisty, stood her ground. But what really helped her were Friday sermons of Bamiyan’s religious leaders who command respect and influence in local communities.

As part of a project to promote gender equality, the United Nations Development Program (UNDP) has trained more than 400 mullahs across Afghanistan to preach about women’s rights. The sermons help bring awareness about the social and economic rights of women, and often include eye-opening conversations with men on subjects such as “how Islam encourages many sports.”

“Mullahs are some of the most powerful voices in Afghan communities—particularly in the more isolated areas where women suffer the greatest abuses,” UNDP Afghanistan country director Douglas Keh told AFP. “By working with these key figures across Afghanistan, we have been able to promote the idea that men and women have equal rights.”

One of those trained to tackle hardened male attitudes is Mullah Abdul Rahman Redwani, director of Hajj and religious affairs in Bamiyan. “Everybody can be literate or a teacher, lecturer, engineer, architect or doctor,” Redwani is seen in a UNDP video, sermonizing in a mosque full of men. “No matter whether they are a girl or boy, everyone must have opportunities both inside and outside the house.”

Masooma said that intervention had brought a sea change in local attitudes. “Before I was mocked. Now I am welcomed by people who say they are proud of me,” she said. “Now a lot of girls and women come out to watch us ski, which was hard to imagine just a few years ago.”

Afghan women have made giant strides since the Taliban regime was ousted in 2001, but they are still so absent from public life that the social media hashtag #WhereAreTheWomen has gained traction in the country. With many decades of conflict tearing the social fabric apart, women in Afghanistan continue to suffer high levels of violence, oppression and abuse, including forced marriages.

The events have become a metaphor of freedom in an Islamic country where any public sporting activity is widely seen as nothing short of a subversive act for women. “My message to girls like Masooma is stay strong; keep the fight going; don’t be discouraged,” said UNDP’s Keh. “You are a model for women and girls not only in Afghanistan but throughout the world.”