The Pak-U.S. Joint Statement: An Overview 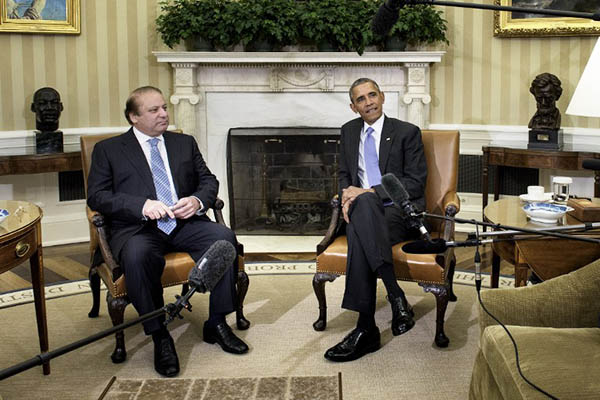 Pakistan fell short on some issues during the talks, but appears to have squeezed in its major concerns.

The 2,868-word Oct. 22 Joint Statement following the meeting between Prime Minister Nawaz Sharif and U.S. President Barack Obama is mostly standard diplomatese, prepared in advance of the meeting and covering known areas of cooperation. That said, there are always things on the agenda that are kept open and which the principals talk about. They may even deviate from what has been discussed earlier and has become part of the draft that is approved and vetted. This statement was put out almost halfway through the meeting, which is not the practice.

As I noted in a scene-setter for this newsmagazine, security remains the primary bond between the two sides, notwithstanding Washington’s “commitment to democracy as a key pillar of the U.S.-Pakistan partnership” or references to other areas of cooperation.

Within the ambit of security, regional security and the nuclear issue—itself subdivided into other categories—were to take center-stage. Both sides have more divergence than convergence on these points.

That said, it does appear that Pakistan tried to squeeze in some of its concerns, though it fell short on some counts.

Take this: “Prime Minister Sharif reaffirmed that Pakistan’s territory will not be used against any other country and noted that this is an obligation of all countries in the region.” This is an improvement but falls short of actually naming the countries.

On Pakistan-India relations, the statement reads: “President Obama and Prime Minister Sharif stressed that improvement in Pakistan-India bilateral relations would greatly enhance prospects for lasting peace, stability, and prosperity in the region.

“The two leaders expressed concern over violence along the Line of Control, and noted their support for confidence-building measures and effective mechanisms that are acceptable to both parties. The leaders emphasized the importance of a sustained and resilient dialogue process between the two neighbors aimed at resolving all outstanding territorial and other disputes, including Kashmir, through peaceful means and working together to address mutual concerns of India and Pakistan regarding terrorism. In this context, the Prime Minister apprised the President about Pakistan’s resolve to take effective action against United Nations-designated terrorist individuals and entities, including Lashkar-e-Tayyiba and its affiliates, as per its international commitments and obligations under U.N. Security Council resolutions and the Financial Action Task Force.”

The statement makes the point about engagement between Pakistan and India, which is important. It mentions violence along the LoC but omits regular fire exchange along the Working Boundary, an important omission because for some time now India, which also used the term ‘Working Boundary’, has started referring to the 202km stretch as the ‘International Border’.

The mention of Kashmir as part of all outstanding disputes and the use of the term ‘disputes’ rather than ‘issues’ is an important inclusion, as is the reference to ‘mutual concerns regarding terrorism’. However, this is diluted in favor of India and loaded against Pakistan with the inclusion of a direct reference to LeT and its affiliates.

Given the general tone of the Joint Statement, there was no reason for a specific reference to LeT, and effective action against United Nations-designated terrorist individuals and entities should have sufficed. In other words, the joint statement, while mentioning ‘mutual concerns’ and following it up with a specific reference to LeT without any reference to India-backed terrorist groups, reduces the impact of Pakistan’s stated position that India, in collusion with elements within Afghanistan’s intelligence set-up, is fomenting trouble in Balochistan and the tribal areas.

This dilution means that the Joint Statement’s further reference to terrorism in and across the region—both leaders noted that the stability of South Asia depended on cooperation among all neighbors to suppress all extremist and militant groups operating in the region—becomes an exercise in generality while becoming specific against Pakistan.

Again, the statement refers to the so-called Haqqani Network specifically: “The Prime Minister outlined the actions that Pakistan is taking under the National Action Plan to ensure that the Taliban–including the Haqqani Network–are unable to operate from the soil of Pakistan.”

There are two problems with this formulation. One, given Kabul’s near-total lack of control in much of the Afghan countryside, Haqqani fighters don’t need to be based in Pakistan. They have mostly been in Afghanistan even before the U.S. drawdown began. This is a fact that Washington and the U.S. intelligence community know well but are loath to concede because it reflects poorly on their 14-year-long efforts.

As for their performance, a good pointer will be their waking up to the fact that Al Qaeda runs training camps in southern Afghanistan. Yes, life and intelligence operations can be more absurd than fiction.

Two, Sirajuddin Haqqani is the most important lieutenant of Mullah Akhtar Mansour, the man on whom everyone is relying for talks with Kabul—at least for now. Mansour is the same man whose delegation met with the Afghan government’s delegation in the presence of U.S. and Chinese representatives. Given the internal fault-lines among the Taliban, which Mansour is trying to bridge, it was a smart move for him to pull Haqqani on his side. Observers also know that Mansour, before any further talks, will try to gain ground both to strengthen his position vis-à-vis Kabul as well as among the Taliban fighters.

To specifically name the Haqqanis in the joint statement makes no sense even going by the efforts Pakistan is making to facilitate talks and to which the statement refers elsewhere as part of an Afghan-owned and -led process. Making a commitment that runs contrary to what facts on the ground are dictating is bad diplomacy. One might have considered this pro forma, except that the U.S. will keep harping about and referring to it to hide its own inability to clean up after itself.

The bit about counterterrorism cooperation from the Sahel to South Asia is neither here nor there. What’s happening in Greater West Asia (the Middle East) is a consequence of the U.S. and its allies’ misplaced and hubristic policies. There’s absolutely no reason for Pakistan to get sucked into any cooperation that does not serve its interests or has no direct bearing on its security.

As for the nuclear talks, “The leaders noted Pakistan’s efforts to improve its strategic trade controls and enhance its engagement with multilateral export control regimes. Recognizing the importance of bilateral engagement in the Security, Strategic Stability and Non-Proliferation Working Group, the two leaders noted that both sides will continue to stay engaged to further build on the ongoing discussions in the working group.”

This is as expected. The reference to enhancing engagement with multilateral export control regimes shows that the sherpas in the working group will get down to fleshing out the details of what kind of deal can possibly be worked out.

This is a highly technical domain and it will be a long time before anything, if at all, comes out of it. The process, however, has been going on for sometime.

That said, while the Joint Statement doesn’t mention it, sources say India’s activities have been shared with the U.S. and Washington has taken note of Pakistan’s concerns on that score. But this, given Washington’s relations with New Delhi, is something on which the U.S. will be circumspect.

I’m curious what the author makes of the fact that there are actually two very different versions of the “joint” statement – one released by the Government of Pakistan and one released by the White House – particularly given that some of the areas he finds problematic only exist in the Pakistani version. For example, the official version published by the White House makes no mention of either Lashkar-e-Taiba – in fact, it makes no mention of Kashmir at all – nor the Haqqani Network. These only exist in Pakistan’s statement.

Actually, the US version does mention the LeT, Kashmir and the Haqqani Network. It is identical to the Pakistani version.

Pakistan should need to do effort for strong relations between both countries.

Whether or not we have strong relations with the US is entirely up to the Americans because they are the ones who bear the full responsibility for the current state of the mutual relationship and the regional instability. And Pakistan must decide how far it should reasonably pursue strong relations with the US depending on how much that would mean sacrificing Pakistan’s critical national and security interests.

I’m surprised there is no comment on some obvious gaps in how Pakistan approached this meeting:

1) This was a bilateral leadership meeting. Yet, almost nothing of bilateral importance seems to have been discussed. Pakistan was standing in Washington, but talking at New Delhi & Kabul. Expectedly, there was no general interest in US for this visit. The only comment in the press was negative.

2) Even in the formalized agenda, the whole objective seems to be limited to scoring a few points against the neighbors. There was some adverse comment by some Indian MEA folks, but beyond that, all of the missives flew harmlessly by. Its unlikely there would be any follow-up, and both sides would be as unprepared for the next crisis as ever.

So, what was the point of it all?