Home Features The Perils of Whistleblowing

The Perils of Whistleblowing 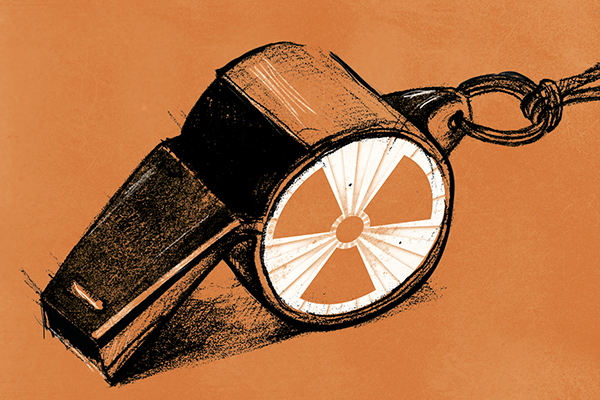 He tried to pull the plug on Pakistan’s nuclear bomb program. His career blew up instead.

[dropcap]R[/dropcap]ichard Barlow was driving his 13-year-old motorhome through a mountain state’s blizzard the week before Thanksgiving when news broke of the Iran nuclear deal. Bad memories flooded his mind, not that they’re ever far away. For more than 25 years, ever since he testified behind closed doors on Capitol Hill that the CIA had “scores” of “absolutely reliable” reports on Pakistan’s clandestine efforts to obtain nuclear bomb technology, his life has been tumbling through one trapdoor after another.

Barlow’s testimony in 1987 shocked several panel members of the House Foreign Affairs subcommittee, in part because Army Gen. David Einsel, assigned to the CIA as a top intelligence official, had just told the committee that—despite the recent arrest of a Pakistani caught red-handed buying prohibited nuclear materials—the evidence that Islamabad was pursuing a bomb was inconclusive. The hearing erupted in shouts when Barlow told them differently. “They went through the roof,” he recalled from the road. By the time he got back to CIA headquarters, “the phones were ringing off the hook.”

Top Reagan administration officials were in “a panic,” he said, because Pakistan was the crucial player in the CIA operation funneling weapons to Islamic “holy warriors” fighting the Soviets next door in Afghanistan. If it became known that Pakistan was secretly building a bomb, a law passed by the U.S. Congress would require a cut-off of military aid. Obsessed with communism, the U.S. administration made a choice: It would turn a blind eye to Pakistan’s nuclear program in order to defeat the Soviets in Afghanistan.

And that meant that Barlow, 33 at the time, had to be destroyed. “For the Cold War warriors, the only way to save the Pakistan program was to discredit the young agency analyst,” British journalists Adrian Levy and Catherine Scott-Clark wrote in their 2007 book, Deception: Pakistan, the United States, and the Secret Trade in Nuclear Weapons.

And they did. His phone stopped ringing. His reports went into circular files. Barlow realized his career at the CIA had flamed out, he says, and he resigned. He moved temporarily to U.S. Customs as a special agent and then to the Pentagon, still tracking nuclear smuggling. After internally objecting to Congressional testimony by Department of Defense officials that Pakistan’s U.S.-bought F-16s were not capable of carrying nuclear weapons he was forced out and subjected to a security investigation, his marriage (to a woman who worked at the CIA) destroyed, he left town. Today, at 59, his savings nearly drained, he wanders the mountains from Montana to Arizona in his motorhome, hunting and fishing with his three dogs, haunted by the idea of what might have been. And what is.

“If they had busted those [Pakistani] networks,” he said, “Iran would have no nuclear program, North Korea wouldn’t have a uranium bomb, and Pakistan wouldn’t have over a hundred nuclear weapons they are driving around in vans to hide from us.”

Iran had no means to advance its nuclear desires without Pakistan’s help, he said. “It would have been impossible. The Iranians lacked the technical, scientific, and engineering capabilities to develop or manufacture centrifuges or nuclear weapons on their own. They were trying, but they were getting nowhere. It made the impossible possible.”

Barlow moved to New Mexico in 1991, but he still had a few friends in the CIA’s analytical wing who valued his expertise on Pakistan. Indeed, in 1988, before his world started crumbling, he’d won a “certificate for services of extreme value to the Central Intelligence Agency,” signed by CIA Director William Webster. And in May 1990, the Pentagon’s security office declared that “any questions of your trustworthiness or access to sensitive information [were] resolved in a manner completely favorable to you.”

For a while he worked for the CIA “out of my house in Santa Fe,” but efforts by his allies to get him fully reinstated were blocked by higher-ups. He reached out to the FBI’s terrorism maven, John O’Neill (who would die on 9/11 at the World Trade Center); O’Neill asked him to help the bureau set up a nuclear counter-proliferation program from the Sandia National Laboratories in Albuquerque. For the next dozen years or so, the exiled Barlow helped run operations to penetrate the nuclear weapons programs of not just Pakistan, but also of Iran, North Korea, and other countries. In 2004 a bureaucratic power struggle broke out between the FBI and Sandia, and his job was eliminated.

‘If they had busted those [Pakistani] networks … Iran would have no nuclear program, North Korea wouldn’t have a uranium bomb.’

Numerous efforts through the years to repair the damage to Barlow have all fallen through. The inspector-general of investigations at the CIA and the State Department found that officials had punished Barlow unfairly. The Pentagon’s inspector-general also found that the department had retaliated against Barlow (albeit just legally). The Government Accountability Office, Congress’s investigative arm, looked into the inspector-general’s handling of Barlow’s case and confirmed the retaliation against him. Although the Senate Armed Services Committee ordered the Pentagon to compensate Barlow for the harm done to him, it refused.

In response, the committee instructed Barlow’s senator, Jeff Bingaman of New Mexico, to introduce a “private bill” to recompense him. But Sen. John Warner of Virginia, a former Secretary of the Navy, with the Pentagon on his home turf, objected. Ducking a confrontation with Warner, the Senate then punted Barlow’s case to the Court of Federal Claims. That proved a blind alley, however, when then-CIA director George Tenet, then-NSA director Michael Hayden and Deputy Secretary of Defense John Hamre declared that all the relevant classified information on Barlow’s case was protected by the so-called state secrets privilege.

In 2009, 22 years after he had first told truth to power about Pakistan, Barlow approached the Obama White House about his case. A plan was hatched to turn Barlow into a “poster boy” for a federal whistle-blowers protection act. That ploy fell apart, however, when it became clear that President Barack Obama had no intention of signing a bill that would include protections for spy-agency employees.

Barlow then turned to a friend, Suzanne Spaulding, a former CIA lawyer and general counsel of the Senate Intelligence Committee. Spaulding recognized the embarrassment the public resolution of his case would cause the State and Defense departments, Barlow said, and proposed the novel idea of urging Leon Panetta, who had become CIA director in 2009, to use a little-known section of the Central Intelligence Act of 1949 that authorizes a CIA director to cut a fast check—in secret—to someone in the interest of national security. Before anything could get going, though, Spaulding was nominated to be an undersecretary of homeland security and Panetta was moved from the CIA to the Pentagon.

In any event, Barlow insists, “I’m not a whistleblower. I testified before a committee behind closed doors in a top-secret session with the full approval of my chain of command.” And look what happened. He has no idea whether Edward Snowden, the former National Security Agency contractor whose leaks have caused an international uproar, drew a lesson from his case. But he noted that “none of us can go to Congress [on our own] with anything, if it’s classified … If you understand this, you understand what Snowden did and the way he did it. My case shows what happens to you when you do it right.”

Anybody who gets Barlow on the phone had better be prepared to talk or trade emails for hours about the nuclear black market, Pakistan’s alleged perfidy, his many travails, and, now, the nuclear deal with Iran.

It’s bad, he insisted. “Iran is gaming” the West. “The holes in the agreement are multiple. Among them, it does absolutely nothing to address Iran’s extensive nuclear weapons physics work … In addition, as long as a country maintains an enrichment plant and stocks of enriched uranium, it is has the capability to make [highly enriched uranium]. And the agreement does not remove a single one of the thousands of centrifuges Iran has.” Centrifuges, he must remind, that began with Pakistan. Barlow could go on—and he will, for hours, late into the cold Arizona night. But for a moment, he paused, hugged one of the dogs at his feet, and laughed into the Skype camera on his laptop. “I used to hunt Pakistanis,” said Barlow. “Now I hunt birds.”

This is an extreme point of concern for the world’s intelligence agencies all over that their own people are involved in exposing the secrets to the world. The above account is one such case. I think we must recall this in our memories that West especially US favoured its allied regime as in the case of Iran, US supported the Shah regime of Iran to build the Busheher power plants. Pakistan built its nuclear power only primarily to counter the Indian threats nothing else. Its focus is state oriented absolutely. Vaguely speaking it appeared to be trend after Snowden that in order to get fame and publicity the former agents crafted newer stories every day. Despite of publishing these whistle blowers, the authorities need to curb this trend as this is the violation of their respective code of conduct and question to the liability of their organizations. We need to understand that these are actually the story tellers nothing else as the statehood can’t be defined by one single unknown person.

The author seems to be insane in building up the story he compiled up huge amount of knowledge but all rest in vein. It is very much clear and an absolute fact that in 1950’s the Iranians were supported by the States government to start up its nuclear power program no doubt it was for civilian purposes but was initiated with the support of USA. Pakistan on the other hand, started building up its nuclear weapon when India tested its nuclear device for the second time in 1998. That test raised concerns on the part of Pakistani government and then Pakistan also tested its device and joined the nuclear weapon club. Before that Pakistan did had the capability to build up its own nuclear device but it didn’t until India provoked it to acquire deterrence capability. Allegations regarding Pakistan’s nuclear program and A.Q.Khan’s clandestine proliferation of nuclear material has become some what old, now these story tellers must go forward and write some thing else to get fame and publicity in the internatinal community.

“I used to hunt Pakistanis” ….. that’s enough to let the world know how low in character a man you are. . You would make any sane person sick to the stomach. ….