The Problem of Janus-faced MQM 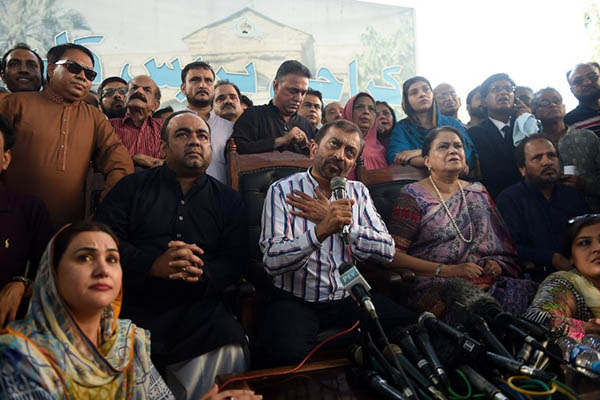 Contrary to reports, there is no change coming for the Altaf Hussain-led party.

Altaf Hussain is out. Farooq Sattar is in. Minus-One without overtly being Minus-One.

This was the motif of TV headlines, tickers and analyses that followed the Tuesday presser of Muttahida Qaumi Movement’s Pakistan leader, Farooq Sattar.

Is that so? Not really.

Like it or not, the MQM is not Farooq Sattar. It is Altaf Hussain. Chagrined we might be but the party, for all its warts, represents the ethnic Mohajir vote in Karachi, Hyderabad and Mirpurkhas. Which is why the change of nomenclature, from Mohajir to Muttahida, has been just that, a surface change. Deep down, the MQM remains entrenched in its Mohajir vote-bank.

This, then, is the reality of Karachi’s politics, as also its deep irony.

To be precise, the MQM was allowed to form and become a political force by General Zia-ul-Haq’s dictatorship. He wanted to put down the Jamaat-e Islami, the Jamiat-e-Ulema-e-Pakistan (the two religio-political parties that controlled the city) and the Pakistan Peoples Party, which was returned from some constituencies, primarily from Lyari.

This was a classic maneuver, using intelligence agencies to support the MQM and, in the beginning its student organization, the APMSO. Most MQM leaders and workers like to deny this, rather vehemently, but it’s a fact, despite memories being short in this country. You see space for another voice, you let that voice be heard and before long you have another political actor in the arena. Except, in the case of the MQM, the operation’s success has since become the failure of the very agencies who have tried, intermittently, to clip the wings of their own monster.

That said, the MQM has managed to do two things over the years: it has given voice to the ethnic Urdu-speaking community and it has, by building a vast and highly-organized system of control, silenced any dissent within and without. The popular side of the party genuinely draws on the city’s ethno-Mohajir particularism, especially with other ethnic-linguistic groups traveling south to Karachi and putting down their roots, given the economic opportunities it offers, and instilling fear among the dominant Urdu-speaking population that sees Karachi as its only abode and its socioeconomic and political potential as essentially its patrimony.

The MQM, in that sense, is a genuine, though terribly parochial, political entity that draws on popular vote and employs fascist control to not only sustain that support but also ensure closure of political space for other political entities.

That said, the Edward Hyde side of the party could not have sustained its darkness without the Henry Jekyll side of it. Altaf Hussain, increasingly obviously unhinged for multiple reasons, obesity being the least of those problems, represents the Janus-faced reality of the MQM. That sharply contrasting duality is also the problem faced by all those, including the current leaders of the establishment, dealing with the party.

But what exactly is the objective here? More appropriately, what should be the objective here? Exorcise Hyde from the MQM so it can play a clean political role without the desire to violently control dissent within and taking away non-political means to prevent other political entities from emerging and playing their legitimate role.

To this end, different strategies have been adopted since the ’90s. Dissent has been created; the MQM divided; operations launched against the party, seeking to purge it of its militant wing; coopting it, making it a part of ruling dispensations, hoping that it could be streamlined and mainstreamed.

Nothing has worked. Dissenters made no impact. Divisions only led to heightened violence between respective undergrounds. Cooption didn’t do the trick, either. The party used the levers of power to further entrench itself as Jekyll and Hyde, reinforcing the very problem that outsiders have tried to solve.

Recent events have seen the party’s criminal elements hit hard and yet, results of by-elections as also local government polls clearly show that the party retains its political primacy. None of the evidence and accusations against the MQM or some of its leaders, especially Altaf Hussain, has dented that vote. If anything, the idea that this is an attempt to put down the ethno-Mohajir particularism has, in all likelihood, worked to the MQM’s advantage.

The only problem, ironically, has been Altaf Hussain himself—increasingly. What has come out about him might not have damaged him or the party as much as what he, generally in a state of inebriation, says while addressing his workers and cadres from London.

On the evening of Aug. 22, he crossed too many red lines. Not only did he provoke his workers to attack media organizations, he also used abusive language against the Army chief and DG Rangers. This is not the first time he has been irresponsible, instigating violence. He has done this before. But this time it reached critical mass.

The Army chief took note of it and ordered a crackdown, something a beleaguered MQM can barely sustain anymore. Rangers picked up the party’s leading lights, including Sattar. But it’s easy to do that; more difficult is the question of tackling the MQM as a political entity.

Sattar’s presser, the words he chose and the way he answered (or didn’t) questions, reflected not only his plight but also the headache of the outsiders trying to deal with the party and with whom Sattar had spent eight hours.

At the end of that time, all Sattar could manage was to say that from now on, the MQM will make its decisions here, i.e., in Karachi, not in London and that “Altaf Hussain’s frequent apologies after incendiary statements is an issue that needs to be resolved.” When pressed for whether this was the minus-one formula, he said “what else do I need to say to elaborate the minus-one formula more.” And yet, at no point, like Mustafa Kamal and his fledgling Pak Sarzameen Party, did Sattar indicate a break from Altaf Hussain. “Until this issue [of Altaf Hussain] is addressed, we’ve decided that sanity should prevail.”

For good measure, Nadeem Nusrat issued an apology from Hussain. Another MQM leader, Saleem Shehzad, tweeted that he would be arriving shortly in Karachi and Sattar himself told the MQM workers that the party would have its mayors in Karachi, Hyderabad and Mirpurkhas.

While this is the most Sattar could do—or the MQM has ever done—to distance the party from Hussain’s verbal nonsense, this is about it. Anything beyond this and Sattar will be a nobody for the MQM vote-bank.

The fact of the matter is, Hussain is reported to have said more—more incendiary. That will also come out, apology or no apology. And the problem of how to deal with the two sides of the party will continue. Until someone from within the MQM can emerge to exercise the same control as Hussain does, no one else can take his place.

In other words, this isn’t over and there’s more to come.

Why would Gen. Zia like to route his allies JI/JUI out of Karachi; since 70s PPP has two blocks in Karachi — Baloch Lyari & Sindhi Malir, obviously not going to affected with rise of MQM — in fact it’s the policies of Ayub/ZAB that led to rise of APMSO/MQM. If no MQM, it would have been TQM, SQM or whatever, but that’s irony.

I second Masood. Zia supporting mqm is just a Northern Pakistan propoganda. I have heard this only there. It also shows how isolated Karachi is from the rest of Pakistan. In the north people would believe anything you tell them about Karachi becuase they have not visited it once in their entire short lives.

Why is it so that when it comes to MQM, even the liberal faces forget their own sermons about liberalism & immediately wear the respective ethnic masks?