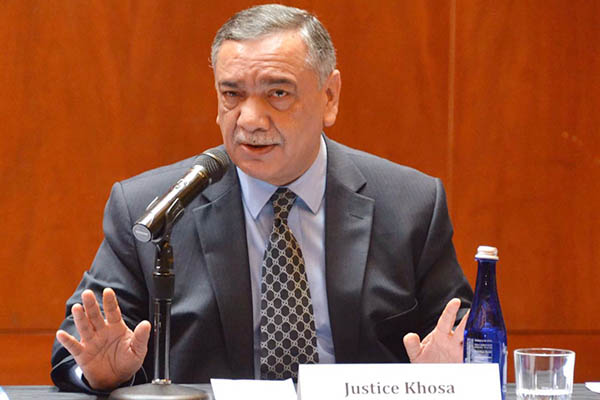 Requiring ritual without sincerity does not produce sadiq and ameen lawmakers

Justice Asif Saeed Khosa, author of a dissenting judgment in the Panama Papers case that sought the disqualification of Prime Minister Nawaz Sharif, says in the ruling that Article 62 of the Constitution is “a recipe for cleansing the fountainhead of the state’s authority and ensuring clean leadership at the top.” This is a problematic assertion.

Article 62 lays down the criterion of personal character of members of the Majlis-e-Shoora [Parliament] as: 1) he is of good character and is not commonly known as one who violates Islamic Injunctions; 2) he has adequate knowledge of Islamic teachings and practices obligatory duties prescribed by Islam as well as abstains from major sins; 3) he is sagacious, righteous and non-profligate, honest and ameen, there being no declaration to the contrary by a court of law; 4) he has not, after the establishment of Pakistan, worked against the integrity of the country or opposed the ideology of Pakistan.

Needless to say, unless you are deeply wedded to ritual, you can’t be a member of the National Assembly or Senate. This probity insisted upon by religion is also contained in the Pakistan Penal Code and a case brought against any lawmaker under any section of the Code automatically disqualifies them. This makes Article 62 tautological and redundant. Even if one were to accept it at face value, it is unclear how anyone would adjudicate the following: “he has adequate knowledge of Islamic teachings and practices obligatory duties prescribed by Islam as well as abstains from major sins.” No doubt, only a cleric or a member of the killer Taliban would fit that bill even though, per Islam, Allah and His judgment of the quality of human faith is the only one that matters.

The truth is that a person who offers regular prayers might still be disqualified for crimes of defalcation listed in the Penal Code; Article 62 would not be able to save them. That the article is not universal is clear from the Constitution, which says that it will not apply to non-Muslims. Justice Khosa himself once declared that a strict application of Article 62 would disqualify most members of Parliament. Yet, an honest man could also be disqualified because he is not wedded to ritual. What the Article actually does is make certain rituals compulsory without ensuring any level of sincerity of faith. It is irrelevant and should be a top contender for amending or excision.