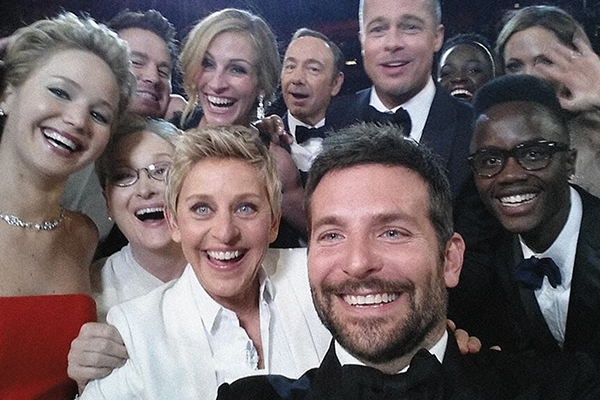 It was the selfie seen around the world. During the live broadcast of the 86th Academy Awards, perfect host Ellen DeGeneres herded an A-plus list of actors for an impromptu photo. “If only Bradley’s arm was longer. Best photo ever,” she tweeted with an image featuring Meryl Streep, Julia Roberts, Brad Pitt, Angelina Jolie, Kevin Spacey, Jennifer Lawrence, Channing Tatum, Lupita Nyong’o, Bradley Cooper. The tweet took social media by storm. It was retweeted over three million times—a new record—and liked over two million times on Facebook. The selfie even crashed Twitter for a few minutes, a fact DeGeneres proudly declared on stage later: “We crashed and broke Twitter. We made history.” The selfie also boosted DeGeneres’ follower count on Twitter from about 25 million to 27 million within 24 hours of the viral picture being posted. It was a Hollywood ending for everyone except Liza Minnelli, who tried but didn’t make the frame.